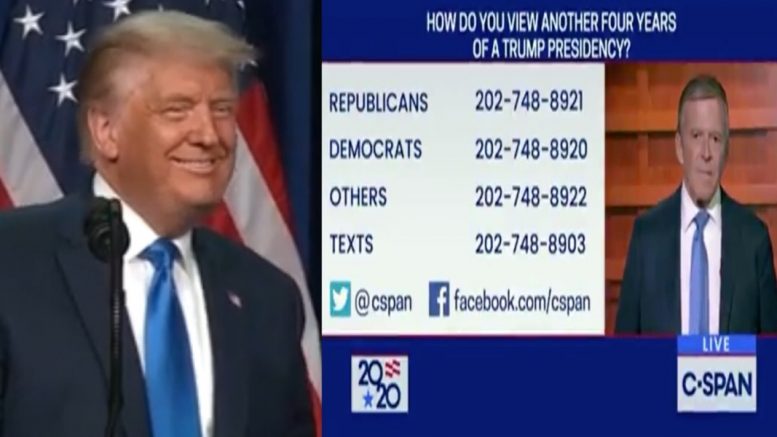 Following the first night of the Republican National Convention, a caller who identified himself as a “lifelong Democrat”, told C-SPAN on Monday evening that he is “definitely changing” his “vote to Republican” this year after watching the convention.

The caller, who identified himself as Rick, from Lorain, Ohio, told C-SPAN, “I tell you what, they just put the [Democratic Party] to shame. I’m gonna follow the Republican Party now”.

When asked to clarify and what “convinced” him to switch his vote after watching the first night of the Republican National Convention, the “lifelong Democrat, Rick” told C-SPAN that he decided– in part– to change his vote because of the way Republicans embraced the word “God.”

“It was the heartfelt way they came across to the American people,” Rick said. “And I was really touched by the number of times they used the word God. They put God into everything. And the people on the Democratic side at their convention, act like they were pushing God right out of it.”

“And that had a lot to do with changing my mind,” he said.

On Sunday the Commander in Chief tweeted: “Two Democrat Caucus Meetings removed ‘UNDER GOD’ from the Pledge of Allegiance. It sounded not only strange, but terrible. That’s where they’re coming from!”

Here is what President Trump was referring to:

At least two caucus meetings at the DNC intentionally dropped "under God" from the Pledge of Allegiance. pic.twitter.com/oqh5AV8skG

(Related: Kim Klacik At RNC Convention: “Dems Still Assume That Black People Will Vote For Them… Blindly Supporting Dems Are Coming To An End”)