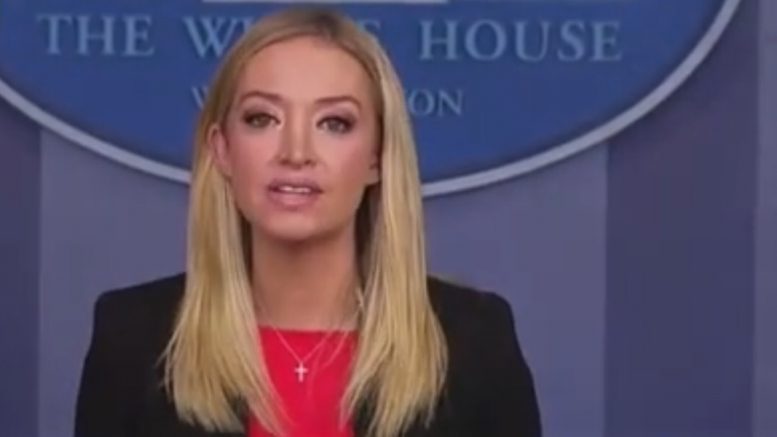 White House press secretary Kayleigh McEnany set the record straight Wednesday with the media over the Trump administrations stance regarding the protesters who stormed the U.S. Capitol on Wednesday, saying “the entire White House” condemns the violence that had occurred.

McEnany gave the press statement from the White House briefing room amid calls for President Trump to be impeached if Vice President Mike Pence does not enact the 25th Amendment.

“I am here to deliver this message on behalf of the entire White House. Let me be clear: the violence we saw yesterday at our nation’s Capitol was appalling, reprehensible and antithetical to the American way,” McEnany said.

“We condemn it, the president and this administration, in the strongest possible terms. It is unacceptable and those that broke the law should be prosecuted to the fullest extent of the law,” she said.

She explained that during the summer she “stood here at this podium the day after a historical church burned amid violent riots”, noting, “I said this: ‘The First Amendment guarantees the right of the people to peaceably assemble. What we saw last night in Washington and across the country was not that'”.

“Make no mistake, what we saw yesterday afternoon in the halls of our Capitol, likewise was not that. We grieve for the loss of life and those injured and we hold them in our prayers and close to hearts at this time. We thank our valiant law enforcement officers who are true American heroes,” McEnany expressed. Continued Below

“What we saw yesterday was a group of violent rioters undermining the legitimate First Amendment rights of the many thousands who came to peacefully have their voices heard at our nation’s Capitol. Those who violently besieged our Capitol are the opposite of everything this administration stands for,” McEnany said.

McEnany also stated “the core value of our administration is the idea that all citizens have the right to live in safety peace and freedom. Those who are working in this building are working to ensure an orderly transition of power.”

“Now it is time for America to unite to come together to reject the violence that we have seen. We are one American people, under God,” the White House press secretary added. Video Below

Following the breach from some of the protesters who went into the Capitol building, the Commander in Chief took to Twitter, issuing a video message to his supporters urging them to “go home” and called for “peace”.

Twitter soon after deleted the president’s video, however, it can be viewed below.

The president’s tweets came before Twitter Safety team released a statement on Wednesday following the social media platform removing three of President Donald Trump’s tweets, which triggered his account to be locked for 12 hours.

Bill Hemmer RIPS AOC Over Her ‘Concentration Camps’ Comparison: ‘Does She Not Owe Every Jew On The Planet An Apology?’