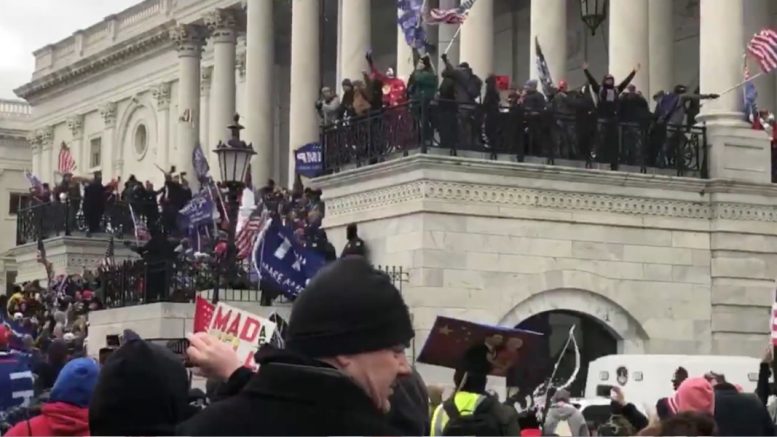 Capitol police ordered lawmakers and reporters to “shelter in place” within the U.S. Capitol on Wednesday, as some passionate protesters at a “March for Trump” entered the building following Congress beginning to certify and or object the Electoral College votes.

The House and Senate went into recess and all the doors closed in the House Chambers. Lawmakers were instructed to grab gas masks under chairs in case they had to leave in haste.

Protesters occupied the steps of the U.S. Capitol:

“Please support our Capitol Police and Law Enforcement. They are truly on the side of our Country. Stay peaceful!” the president urged.

“I am asking for everyone at the U.S. Capitol to remain peaceful. No violence! Remember, WE are the Party of Law & Order – respect the Law and our great men and women in Blue. Thank you!” the Commander in Chief also wrote.

However, patriots stormed the Capitol instead and entered inside the building:

View from inside the Capitol as people gather on the West Front. The Capitol is currently on lockdown. pic.twitter.com/XKNKWNbHxZ

Trump supporters have broken into the Capitol
pic.twitter.com/JwFfaCq2dJ

Guns drawn in the Capitol Building as Trump supporters have stormed inside.

Jason Chaffetz: “McConnell Should Step Down As The Minority Leader & They Oughta Put In Tim Scott There”

Trump on What he ‘Would do Differently a Second Time’ in WH: ‘I Really Would not Focus on [the Media]…They’re Unbelievably Dishonest’