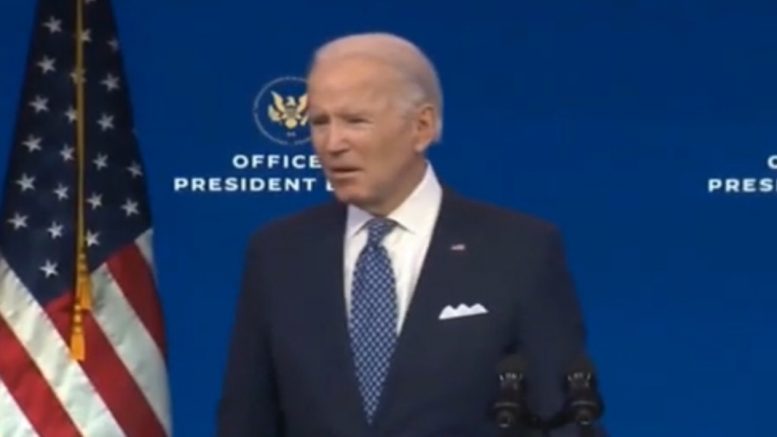 Despite Hunter Biden confirming earlier this month that he is under federal investigation for his “tax affairs”, Joe Biden said at a press conference Monday that October reports regarding his son’s purported laptop were the work of “Russian disinformation.”

“I learned yesterday for the first time that the U.S. Attorney’s Office in Delaware advised my legal counsel, also yesterday, that they are investigating my tax affairs,” Hunter Biden said in a statement. “I take this matter very seriously but I am confident that a professional and objective review of these matters will demonstrate that I handled my affairs legally and appropriately, including with the benefit of professional tax advisors.”

In October, Director of National Intelligence John Ratcliffe shot down Democrats’ notion, emphasizing the scandal surrounding Hunter Biden’s laptop is not part of some kind of Russian disinformation campaign.

“Let me be clear, the intelligence community doesn’t believe that because there’s no intelligence that supports that,” Ratcliffe said in response to California Democratic Rep. Adam Schiff’s theory during an interview with Fox Business’ Maria Bartiromo. “And we haven’t shared any information with Chairman Schiff or any other member of Congress that Hunter Biden’s laptop is part of some Russian disinformation campaign. It’s simply not true.”

Likewise, the FBI and Justice Department officials concur with an assessment from DNI Ratcliffe that the laptop is not part of a Russian disinformation campaign targeting Joe Biden.

Just before the final presidential debate, more than 50 former senior intelligence officials signed on to a letter outlining their belief that the recent disclosure of emails allegedly belonging to Joe Biden’s son “has all the classic earmarks of a Russian information operation”, Swamp Drain reported. Continued Below

Joe Biden during that debate, conveniently seized on the opportunity to point to the letter from the former intelligence officials by playing the Russia card, to ultimately dodge the allegations of the New York Post’s reporting. President Trump, in turn, mocked Biden saying: “You mean the laptop is now another Russia, Russia, Russia hoax? You’ve got to be kidding me.”

On Tuesday, Fox News’ Peter Doocy aksed Joe Biden whether he thought previous stories regarding his son’s laptop were the work of a Russian disinformation. “Do you still think the story from the fall about Hunter were Russian disinformation as a smear campaign like you said?” Doocy wondered.

“Yes, yes, yes. God love ya, man. You are a one-horse pony. I tell ya. Thank you. thank you. I promise you my justice department will be totally on its own making its judgments about how to proceed,” Biden claimed. Video Below

Dorsey and Zuckerberg both admitted that they do not have any evidence to prove that The New York Post’s highly-censored Hunter Biden story over his laptop contains Russian disinformation.

“We don’t”: Twitter CEO Jack Dorsey admits they don't have any evidence to say the New York Post Biden story is disinformationhttps://t.co/pCnv4L9doW pic.twitter.com/O4iye3COEo

Twitter CEO Jack Dorsey and Facebook CEO Mark Zuckerberg admit they have “no information at all to indicate that Russia was the source of this New York Post article”https://t.co/sMdOkjuDuJ pic.twitter.com/6wqhIUeYYr

President Trump, before William Barr’s resignation, hit the the attorney general, calling it a “big disappointment” over the fact that he knew about the federal investigation into Biden’s son and did not disclose it before Election Day.

The president tweeted last week: “IF Biden gets in, nothing will happen to Hunter or Joe. Barr will do nothing, and the new group of partisan killers coming in will quickly kill it all. Same thing with Durham. We caught them cold, spying, treason & more (the hard part), but ‘Justice’ took too long. Will be DOA!”

“Why didn’t Bill Barr reveal the truth to the public, before the Election, about Hunter Biden. Joe was lying on the debate stage that nothing was wrong, or going on – Press confirmed. Big disadvantage for Republicans at the polls!” President Trump also wrote.