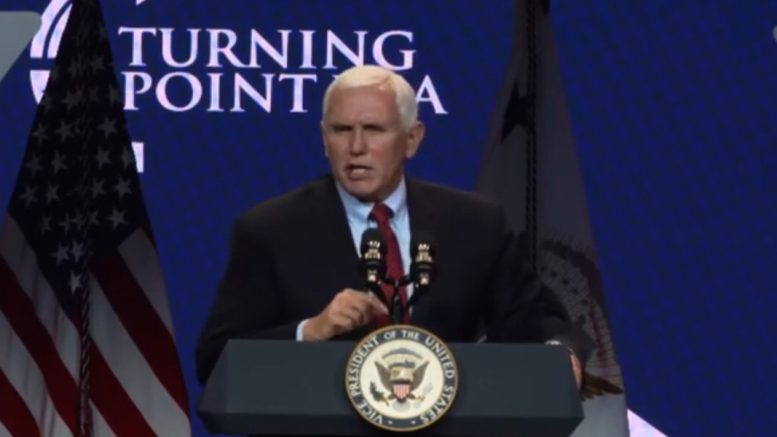 “As our election contest continues, I’ll make you a promise: We’re gonna keep fighting until every legal vote is counted and every illegal vote is thrown out,” the vice president vowed. “… We’re gonna save America, and we’ll never stop fighting to make America great again! You watch.”

He clarified, saying, “Where we cut taxes, rolled back regulations and advanced freedom, their agenda is higher taxes, open borders, socialized medicine, and the Green New Deal and abortion demand. They want to make rich people poorer and poor people more comfortable. We have fought to make every American richer, and that’s exactly what we’ve done. Under President Donald Trump, the median household income in America rose by the largest amount ever recorded. A rising tide lifts lifts all boats.”

“Stay in the fight to finish what we started. The president and I are counting on all of you. We need your voices, we need this energy and we need your vision. We need you to stay in the fight for freedom, because the fight for freedom never ends. … My second favorite president use to say, ‘Freedom is never more than one generation away from extinction. … I believe we are gonna win this generation for freedom. … America will never be a socialist country,” Pence declared. Video Below

Vice President @Mike_Pence says "Come Jan. 5th, we are going to hold the line in the Senate and reelect a Republican majority, as our election continues we are going to keep fighting until every legal vote is counted and every illegal vote is thrown out." https://t.co/VlT7z8drtO pic.twitter.com/nact7rtvcP

In his closing remarks, Vice President Mike Pence said, “I want to encourage you to have faith, have faith in yourselves and in your own capacity to make a difference in the life of your family, your communities, faith in your nation– speak your dreams. It’s the first test of someone who would step into the public square. You gotta be willing to look people in the eye and say, ‘I’ve got a heart to serve and I’m willing to step forward and help lead America’ Believe in yourself”.

“And have faith in this president who will never stop fighting, who built the biggest and broadest coalition of conservatives in the history of this country and is going to keep fighting to make America great again,” he said. Continued Below

“And finally after this challenging year … on this Christmas week, I’d encourage you to take time to be still, reflect on the blessings in your life, blessings of your families, blessings of having been born and raised in the greatest nation in the history of the world. And also take a moment to be still, and if you’re inclined as we do at my house, come Christmas morning, take a moment to reflect on the grace that came to mankind, wrapped in clothes and lying in a manger so many years ago. … The Bible tells us ‘Those who wait on the Lord, will renew their strength and soar on wings like eagles,'” he said.

“Put your faith in him, who is ever guided the destiny of this great land. I believe we are gonna keep on winning,” Pence expressed. “We are gonna keep our freedom for this generation and the next, and the best days for the conservative movement and for the United States of America are yet to come. God bless you, God bless America!” the vice president expressed.