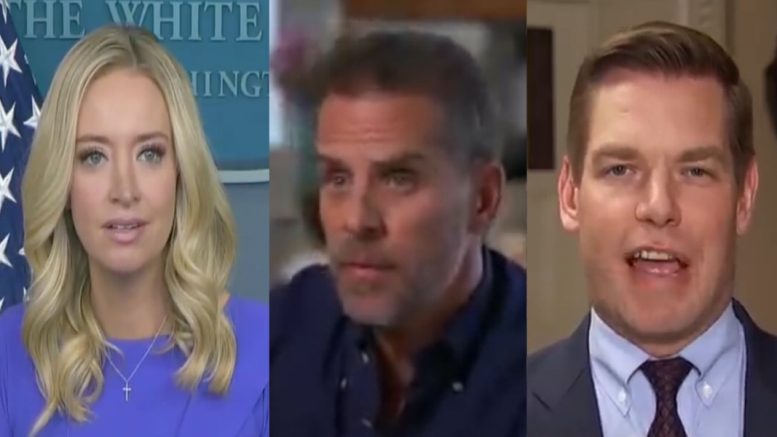 White House press secretary Kayleigh McEnany on Tuesday, slammed the media during a press briefing, for their selective coverage in relation to Joe Biden’s son, Hunter, which broke in October and December, as well as the report over Rep. Eric Swalwell (D-CA), who had extensive connections with a Chinese spy.

“We shouldn’t be surprised because because in the last 24-48 hours there have been quite a few stories that have not gotten a ton of coverage in the mainstream media,” McEnany said.

“As former White House press secretary Ari Fletcher said, ‘Bias is often found in stories the press does not cover’, and last week we found out that Democrat Congressman Eric Swalwell was infiltrated by an alleged Chinese spy,” McEnany told reporters.

“The spy cozied up to Swalwell, raised funds for his 2014 campaign, and even planted an intern in his office. That relationship continued until the FBI briefed him in 2015. That was some very good reporting done by Axios,” she continued. “But after entangling this spy for years, Swalwell hypocritically went on to be one of the lead instigators of the Russia collusion hoax in the impeachment sham”.

The White House press secretary pointed out instances of when Swalwell wrote allegations against President Trump on his congressional webpage, such as claiming the Commander in Chief “is an agent of Russia”, noting it is “not true”.

“These baseless attacks were false, yet covered breathlessly by the media. There was no coverage, however, of Swalwell being the one implicated with not Russia, but China,” she explained. “In fact, The New York Times’ website, as of this morning, had not one result for Eric Swalwell’s ties to Chinese spies, not one result. And when the Swalwell story broke, guess how many minutes of coverage it got on ABC, NBC, MSNBC, and CBS? Zero. CNN devoted three minutes and sixteen seconds to it, however, it was covered on Fox.” Continued Below

“Interesting pre-election and post-election coverage too on the Hunter Biden scandal, which was not covered at all by many outlets in the lead up to the election,” McEnany also pointed out. “In fact, on October 15, you had a New York Times headline that said, ‘Trump’s said to be warned that he was being given Russian disinformation over Hunter Biden.'”

“Really interesting turn of events, and good for those who covered what was a story all along and not Russia disinformation,” McEnany added. Video Below

.@PressSec calls out the Media for their selective coverage of stories like the Hunter Biden story. pic.twitter.com/yfYRCX6JXg

(Related: McEnany Exposes The Left’s Hypocrisy Over The Call For Unity: “Many Sought To Undermine [Trump], Discredit, Delegitimize & Deny His Victory”)