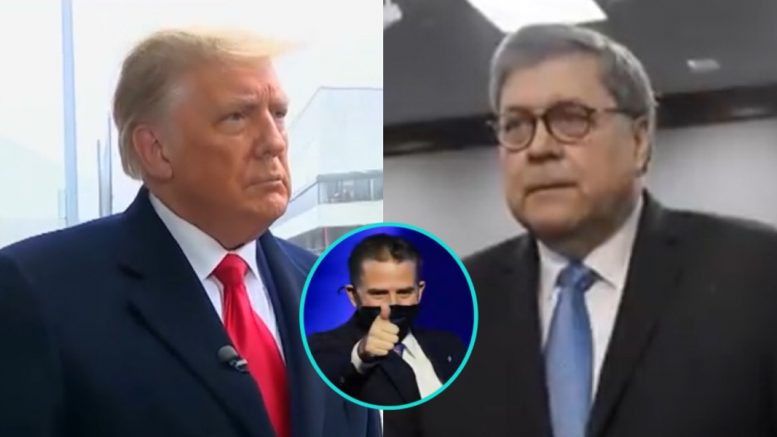 The Commander in Chief on Saturday, told Brian Kilmeade in an interview at the Army-Navy football game, which aired on “Fox & Friends” Sunday morning, that Attorney General William Barr “frankly did the wrong thing” regarding reported investigations into the Bidens.

Hunter Biden, the son of Joe Biden, confirmed on Wednesday that his finances are being investigated by federal prosecutors in Delaware.

“I learned yesterday for the first time that the U.S. Attorney’s Office in Delaware advised my legal counsel, also yesterday, that they are investigating my tax affairs,” Hunter Biden said in a statement. “I take this matter very seriously but I am confident that a professional and objective review of these matters will demonstrate that I handled my affairs legally and appropriately, including with the benefit of professional tax advisors.”

Attorney General William Barr’s reported attempts to keep the Biden investigations from becoming public were in accordance with Justice Department rules that restrict prosecutors from taking public investigative steps that could affect the outcome of an election.

Asked if he was disappointed that Attorney General William Barr knew about two criminal investigations into Hunter Biden’s financial dealings for months before the US general election but kept them from the public, President Trump told Kilmeade, “Everybody is. Who isn’t disappointed?”

“Joe Biden lied on the debate stage. He said there’s nothing happening, … and Bill Barr should’ve stepped up. I’ll tell you what; say what you want about Robert Mueller. When Buzzfeed put out a phony article, … Bob Mueller stepped out and he said that article was a phony and then there was ultimately proven no collusion, after two years there was no collusion,” said the president. “But Bob Mueller stood up, he interjected that this article was false. Bill Barr should’ve done the same thing.” Continued Below

“But when you affect an election, Bill Barr frankly, did the wrong thing,” said the Commander in Chief.

The president, also on Saturday, took to Twitter to say: “IF Biden gets in, nothing will happen to Hunter or Joe. Barr will do nothing, and the new group of partisan killers coming in will quickly kill it all. Same thing with Durham. We caught them cold, spying, treason & more (the hard part), but ‘Justice’ took too long. Will be DOA!”

“Why didn’t Bill Barr reveal the truth to the public, before the Election, about Hunter Biden. Joe was lying on the debate stage that nothing was wrong, or going on – Press confirmed. Big disadvantage for Republicans at the polls!” President Trump also wrote.

As reported by Sinclair Broadcast Group, a justice department official has confirmed that the FBI opened up a criminal investigation into Hunter Biden and his associates back in 2019, focused on allegations of money-laundering and that the probe remains active, per Swamp Drain.

🚨🚨🚨BREAKING: The FBI has an active criminal investigation into the Biden family and their business associates that is focused on money laundering. pic.twitter.com/hcuI98t1Yr