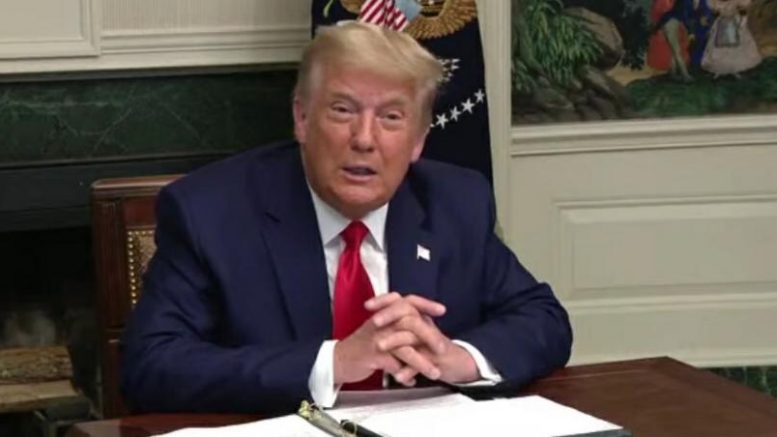 The Commander in Chief on Thanksgiving Day, told reporters that he will go to Georgia on Saturday, December 5th, for a rally, to campaign for Republican Senators David Perdue and Kelly Loeffler.

President Trump told reporters, “We are looking for a site; we’re gonna have a tremendous turnout. We seem to always have a good turnout.”

“I don’t want them to be disappointed. That will solve itself. We are finding votes. Once we get to the signatures, we’ll take over 100% … Georgia. And we will get Georgia, but they have to show us the signatures. Stacy Abrams pulled the wool over the Secretary of State. I don’t know who he is. … This guy got played like I’ve never seen anyone played. … Let us see the signatures,” Trump insisted.

“Why is he not letting us see? There’s only one reason you can’t see the signatures. That’s because there’s fraud all over the place. And even without looking at signatures, as you know, we found thousands of wrong votes. And by the way, always against me. It was not like 50/50, it was always against me,” he noted. Continued Below

“I’ll be going there on Saturday night, and maybe I’ll go twice,” the president said over campaigning in Georgia.

“It’s very important we win those races,” he emphasized. “These are two great people. I know them both very well.”

“I just want to tell my people, don’t be disappointed yet, because this race is far from over. But I’m going on Saturday night. I’ll be in Georgia and we’re gonna have a tremendous crowd. They’re looking for the right site. Probably we’d love to take one of the big stadiums, but you can’t because of the COVID,” the Commander in Chief said. Video Below

“So we’ll have an outdoor form of probably an airport, most likely. And we’ll have, you know, 10’s of thousands of people show up. But I think it’s very important. I may go a second time, depending on how they’re doing. But they’re two really good people,” Trump added.

UPDATE: WH clarifies President Trump's schedule – his Saturday visit to GA to campaign in the Runoff Elections is for Saturday Dec. 5th NOT tomorrow. @OANN

Georgia election rules called for runoff races when no candidate exceeded 50% of voter share in either race during the Nov. 3 general election. Jan. 5 is the last day to vote in the Georgia U.S. Senate runoff elections. Polls close at 7 p.m. ET, as reported by CNBC.

With the assistance of other lawyers, Sidney Powell filed a massive 104-page lawsuit in Georgia and a hefty 75-page lawsuit in Michigan — both detailing multiple instances of alleged election fraud that took place in the two states on November 3rd and the days following the 2020 election.

“The Kraken was just released on Georgia… Also #ReleaseTheKraken in Michigan,” Powell tweeted just after midnight on Thanksgiving. She included a link to both complaints, and promised, “Exhibits to follow.”

Attorney Lin Wood on Monday evening, tweeted a photo showing a “filed notice of subpoena” for Atlanta Hawks VP Scott Wilkinson from the US District Court with GA Secretary of State Raffensperger listed as the Defendant, to obtain video evidence from the State Farm arena.