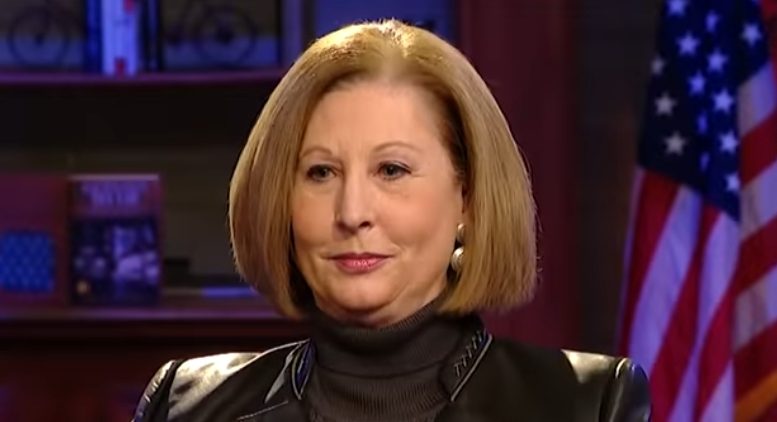 Attorney Sidney Powell stuck to her word and ‘released the Kraken’ in both Georgia and Michigan on Wednesday.

With the assistance of other lawyers, Powell filed a massive 104-page lawsuit in Georgia and a hefty 75-page lawsuit in Michigan — both detailing multiple instances of alleged election fraud that took place in the two states on November 3rd and the days following the 2020 election.

“The Kraken was just released on Georgia…Also #ReleaseTheKraken in Michigan,” Powell tweeted just after midnight on Thanksgiving. She included a link to both complaints, and promised, “Exhibits to follow.”

Sidney’s tweet was removed from Twitter just hours after she posted it, but we were able to capture a screenshot. 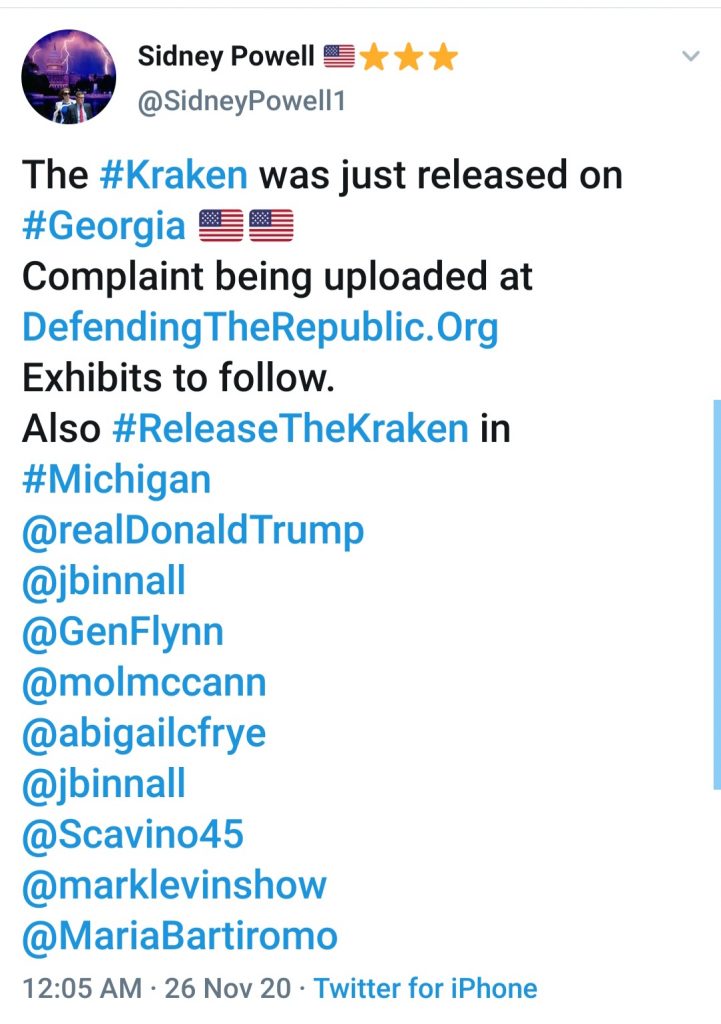 The complaint filed in Georgia lists Governor Brian Kemp, Secretary of State Brad Raffensperger and multiple election officials as the defendants. The lawsuit states as follows:

“The scheme and artifice to defraud was for the purpose of illegally and fraudulently manipulating the vote count to make certain the election of Joe Biden as President of the United States.

“The fraud was executed by many means, but the most fundamentally troubling, insidious, and egregious is the systemic adaptation of old-fashioned “ballot-stuffing.” It has now been amplified and rendered virtually invisible by computer software created and run by domestic and foreign actors for that very purpose. Mathematical and statistical anomalies rising to the level of impossibilities, as shown by affidavits of multiple witnesses, documentation, and expert testimony evince this scheme across the state of Georgia. Especially egregious conduct arose in Forsyth, Paulding, Cherokee, Hall, and Barrow County. This scheme and artifice to defraud affected tens of thousands of votes in Georgia alone and “rigged” the election in Georgia for Joe Biden.”

You can read the full complaint that was filed in Georgia by CLICKING HERE.

The complaint that was filed in Michigan targets Governor Gretchen Whitmer, Secretary of State Jocelyn Benson and Michigan’s entire Board of State Canvassers.

The Michigan lawsuit states as follows:

“This civil action brings to light a massive election fraud, multiple violations of the Michigan Election Code…,in addition to the Election and Electors Clauses and Equal Protection Clause of the U.S. Constitution violations that occurred during the
2020 General Election throughout the State of Michigan, as set forth in the affidavits of dozens of eye witnesses and the statistical anomalies and mathematical impossibilities detailed in the affidavits of expert witnesses.

“The scheme and artifice to defraud was for the purpose of illegally and fraudulently manipulating the vote count to manufacture an election of Joe Biden as President of the United States. The fraud was executed by many means, but the most fundamentally troubling, insidious, and egregious ploy was the systemic adaptation of old-fashioned ‘ballot-stuffing.’ It has now been amplified and rendered virtually invisible by computer software created and run by domestic and foreign actors for that very purpose. This Complaint details an especially egregious range of conduct in Wayne County and the City of Detroit, though this conduct occurred throughout the State at the direction of Michigan state election officials.”

You can read the full complaint that was filed in Michigan by CLICKING HERE.

Powell initially signaled that she would begin to process of ‘releasing the Kraken’ by filing a ‘massive’ lawsuit in the state of Georgia by the end of Wednesday. However, Michigan’s inclusion in her round of late-night filings suggests that Powell could be moving swiftly to take action in other states where she seeks to stop the certification of votes, including Pennsylvania, Wisconsin, Nevada and Arizona.

As per her ‘Defending The Republic’ website, Sidney Powell writes:

“In Bush v. Gore the Supreme Court recognized that once vested in the people, the right to vote is fundamental, and one source of its fundamental nature lies in the equal weight of each vote.

“This fundamental right to equal weight was not defended or actualized in this election. There is evidence of ballots being discarded, hundreds of thousands of ballots appearing out of thin air, ballot harvesting, and a lower standard of verification for some mail-in ballots. This is voter fraud and has infringed upon Americans’ sacred right to vote and for their votes to carry equal weight.

“The case will seek to block the certification of the election results so that justice can be done. We need to stop the steal in its tracks.

“The future of our Republic is at stake. The left, the media, and a complicit Republican Establishment are attempting to steal this election through a staggering voter fraud operation. The time to fight is now!”

You can donate to Ms. Powell’s effort by CLICKING HERE.