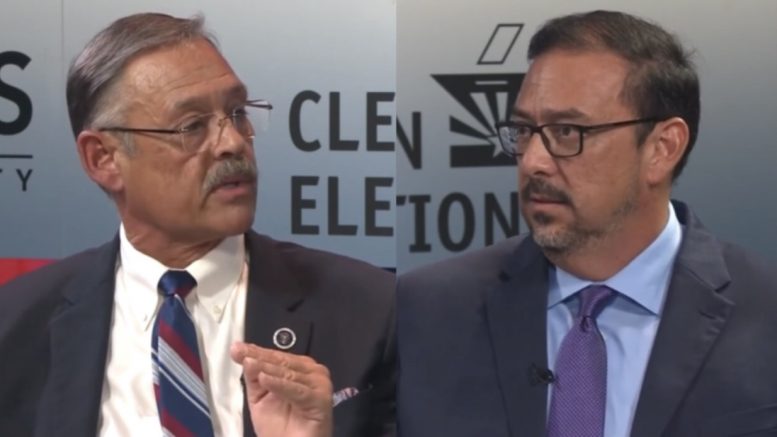 Republican nominee for Arizona secretary of state, Mark Finchem, called for election laws to be followed at the secretary of state’s office — during a debate this week against his Democrat opponent Adrian Fontes, who was the former Maricopa County Recorder.

Finchem condemned Adrian Fontes’ reported history of lawlessness and election mismanagement, citing an article from AZ Central, in which Fontes had announced that he’d be mailing ballots to registered Democrats who had not yet voted in the 2020 presidential preference election.

“We are living in abnormal times, but that doesn’t give Maricopa County Recorder Adrian Fontes the right to make up election laws as he goes along,” Laurie Roberts of AZ Central wrote.

State Rep. Mark Finchem read portions of Roberts’ article aloud during the debate, which criticized his opponent: “‘Fontes is making up election laws as he goes along. This won’t end well'”.

“In fact”, he continued reading from the article: “‘Frightening thought– that the guy in charge of elections can do as he pleases as long as there’s no prohibition in the law?'”

Rep. Finchem also pointed out Fontes’ election mismanagement issues, saying that in 2018, “63 precincts experienced significant issues and were not able to open on time”.

Finchem described during the debate how he will improve Arizona’s election transparency and retention of election records:

The Republican nominee explained why he is running to represent voters in the Grand Canyon State:

Sen. Rogers Slams ‘RINO’ Ken Bennett As Being The ‘Wrong Messenger Of The Arizona Audit Results’

WATCH: Reps. Greene & Dingle Get Into A Heated Shouting Match On Capitol Steps