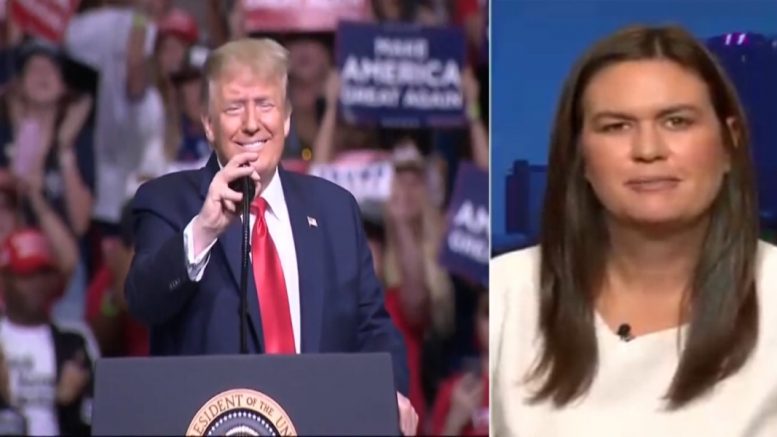 During a Tuesday interview on “Fox & Friends”, former White House press secretary Sarah Huckabee Sanders suggested how President Trump can widen his base ahead of November’s presidential election.

Sanders proposed that the Commander in Chief focus on rebuilding the economy amid the coronavirus pandemic by remaining the “ultimate outsider” and “disrupter,” in Washington D.C.

Brian Kilmeade said recent polls reported that President Trump is trailing behind Joe Biden, including by about 10 points with independent voters.

“There are a couple [of] things. Number one: the economy still reigns King. And, no one should be better and more equipped to handle rebuilding the economy than somebody who has already done it like President Trump,” Sanders replied. “Also, you have three big voting blocks. Seniors, women — and these two, along with evangelicals, are places where the president should do very well.”

“Let’s not forget, Donald Trump is still the ultimate outsider, the disrupter, the change agent going up against the ultimate Washington insider. Joe Biden is a liberal career politician who has been part of the problem for the last 50 years,” she explained, zeroing in on the long time politician. Continued Below

“Donald Trump has only been there for three years and already managed to do a tremendous amount of good. A vote for Joe Biden is a vote for free healthcare for illegal immigrants. It’s a vote against good judges. It’s a vote against protecting the unborn,” Sanders continued. “These are things that Donald Trump needs to remind voters of. Make that contrast, and I think he will do extremely well with those three key voting blocks that he needs to win.”

Last June, during a Democratic debate, Joe Biden along with with the rest of the candidates, had raised their hands in support of giving healthcare to undocumented immigrants. The president tweeted after seeing the Democrats raise their hands, asking on Twitter: “How about taking care of American Citizens first!?”

“Let’s go back to the basics for Donald Trump: change agent, disrupter, outsider. That is a winning message for this president. And, I think if he stays focused on it he is going to do extremely well in November,” Sanders recommended. Video Below

(Related: Biden Claims 10-15% Of Americans Are ‘Not Very Good People’, Sarah Sanders Reacts: “He’s Showing Us Every Single Day He’s Not That Person That Can Bring Us Together”)