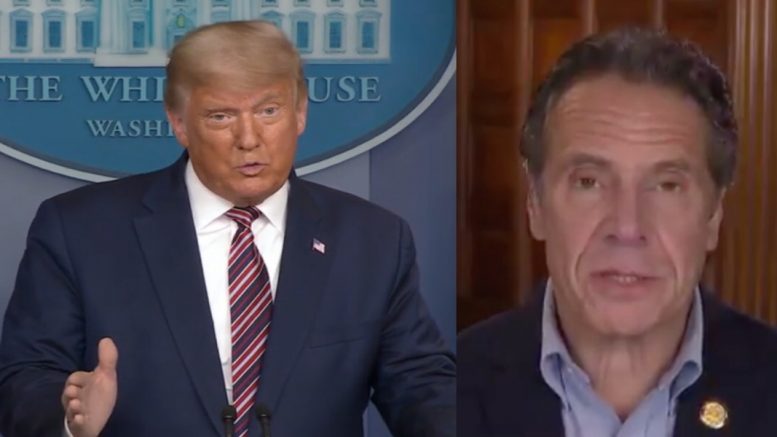 The Commander in Chief held a news conference in the Rose Garden at the White House Friday with an update over Operation Warp Speed and ripped New York Governor Andrew Cuomo (D) over his refusal to accept the vaccine from his administration, as previously reported by The Freedom Times.

“For political reasons, the governor decided … he wants to take his time on the vaccine. He doesn’t trust where the vaccine’s coming from. … But he doesn’t trust the fact that it’s this White House, this administration. We won’t be delivering it to New York until we have authorization to do so. That pains me to say that. This is a very successful, amazing vaccine”, the president expressed. [Emphasis added].

Following the president’s remarks, establishment media, the New York attorney general, and a blue-checkmark on Twitter appeared to mislead the public over the president’s full context regarding the coronavirus vaccine.

CNBC claimed Friday that President Trump said the “Coronavirus vaccine won’t be delivered to New York”. The network, owned by Comcast, suspiciously left out the rest of the sentence from the president in which Trump said, “We won’t be delivering it to New York until we have authorization to do so.”

New York Attorney General Letitia James took to Twitter Friday, threatening the president, writing, “Any attempt by Donald Trump to deny New York access to a lifesaving #COVID19 vaccine will be met with a lawsuit, plain and simple. Stop playing politics with people’s lives.” Continued Below

Also responding to the president, Governor Cuomo claimed on MSNBC Friday, “None of what he said is true. Uh, surprise, surprise. We’re all excited about the possibility of a vaccine. It’s not that people don’t trust the vaccine companies, the pharmaceutical companies. … But an overwhelming percentage of American’s are worried about political interference in the vaccination process, in the approval process by the president. The American people trust the drug company, more than they trust the president.”

On Saturday, President Trump reacted to the criticism, writing on Twitter, ” I LOVE NEW YORK! As everyone knows, the Trump Administration has produced a great and safe VACCINE far ahead of schedule. Another Administration would have taken five years.”

“The problem is, @NYGovCuomo said that he will delay using it, and other states WANT IT NOW. We cannot waste time and can only give to those states that will use the Vaccine immediately. Therefore the New York delay. Many lives to be saved, but we are ready when they are. Stop playing politics!” the Commander in Chief demanded. Continued Below

During a Monday interview on ACB’s “Good Morning America”, however, Governor Cuomo told George Stephanopoulos of the vaccine, “Well, it’s good news/bad news, George. The good news is the Pfizer tests look good and we’ll have a vaccine shortly. The bad news is that it’s about two months before Joe Biden takes over and that means this administration is going to be implementing a vaccine plan. The vaccine plan is very important and it’s probably the most ambitious undertaking since COVID began.”

“And the Trump Administration is rolling out the vaccination plan, and I believe it’s flawed. …  I think [Biden’s] first step saying let’s focus on the science, let’s depoliticize testing, data– listen to the scientists is the exact opposite of Trump. But you have two months, and we can’t let this vaccination plan go forward the way that Trump and his administration is designing it, because Biden can’t undo it two months later,” Cuomo alleged.

“We’ll be in the midst of it and I’m going– I’ve been talking to governors across the nation about that. How can we shape the Trump Administration vaccine plan to fix it or stop it before it does damage?” the New York governor wondered. Continued Below

.@NYGovCuomo joined @KatyTurNBC on @MSNBC to react to President Trump’s remarks claiming the coronavirus vaccine will not be delivered to New Yorkers.

“None of what he said is true… surprise, surprise.”

Any attempt by Donald Trump to deny New York access to a lifesaving #COVID19 vaccine will be met with a lawsuit, plain and simple.

Trump just threatened to deny New Yorkers the vaccine. One of the most disgusting things he’s ever done. Unforgivable. He belongs in prison.

James Woods Kicks Off His Return To Twitter With A Bang, Targets AOC, Hillary, Romney & More

Ratcliffe: ‘I Would Expect & Anticipate… Quite a Few More Indictments’ Related To Durham’s Investigation