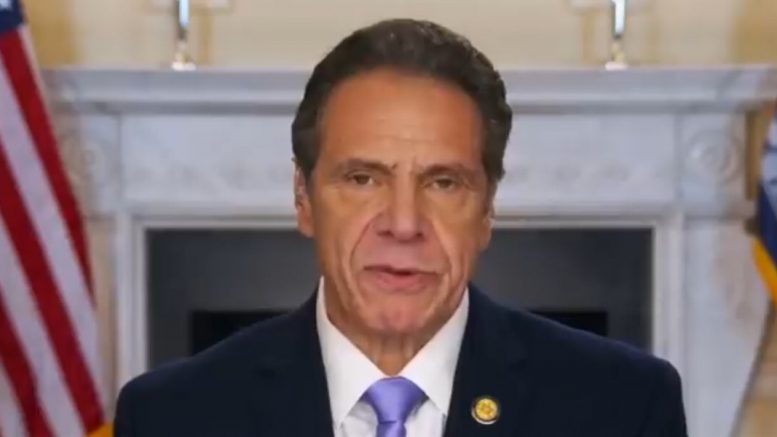 Pfizer Inc’s PFE.N experimental COVID-19 vaccine was more than 90% effective based on initial trial results, the company said on Monday, a major victory in the fight against a pandemic that has killed over a million people and battered the world’s economy, Reuters reported.

Pfizer and its German partner BioNTech SE BNTX.O estimate they can roll out up to 50 million doses this year, enough to protect 25 million people, and then produce up to 1.3 billion doses in 2021. “Today is a great day for science and humanity,” Albert Bourla, Pfizer’s chairman and chief executive, said, per Reuters.

During an interview on ACB’s “Good Morning America”, George Stephanopoulos asked Governor Cuomo, “There’s a vaccine distribution within the next two months, what do you make of this news?”

“Well, it’s good news/bad news, George. The good news is the Pfizer tests look good and we’ll have a vaccine shortly. The bad news is that it’s about two months before Joe Biden takes over and that means this administration is going to be implementing a vaccine plan. The vaccine plan is very important and it’s probably the most ambitious undertaking since COVID began,” Cuomo said. Continued Below

“Just to put it in focus, we did 20 million COVID tests in this nation over seven months scrambling doing everything we can. We now have to do 330 million vaccinations, maybe twice. My state does more testing than any state in the United States. We did 12 million tests. We have to do 20 million vaccines,” Cuomo continued.

“And the Trump Administration is rolling out the vaccination plan, and I believe it’s flawed. I believe it learns nothing from the past. They’re basically going to have the private providers do it, and that’s going to leave out all sorts of communities that were left out the first time when COVID ravaged them,” he said.

Asked what needs to be done that the Trump Administration won’t do that President-Elect Biden could do?, Cuomo replied, “Yeah, the Biden administration, when you deny– when you deny a problem the way Trump did, you can never solve it and that’s true in life. The Trump Administration denied COVID. So they were never ready for it. There was no mobilization of the government, and they’re still doing the same thing. They’re going to take this vaccine and they’re going to go through the private mechanism–through hospitals, through drug market chains, etcetera.”

“That’s going to be slow and that’s going to bypass the communities that we call health care deserts. If you don’t have a Rite Aid or a CVS then you’re in trouble and that’s what happened the first time with COVID. Why do we have such a disparity in the infection rate and mortality rate in COVID? Because some communities don’t have the same access to health care,” Cuomo said. Video Below

“I’m sure the Biden administration is going to address that. I think his first step saying let’s focus on the science, let’s depoliticize testing data, listen to the scientists is the exact opposite of Trump, but you have two months and we can’t let this vaccination plan go forward the way that Trump and his administration is designing it, because Biden can’t undo it two months later,” Cuomo said.

“We’ll be in the midst of it and I’m going– I’ve been talking to governors across the nation about that. How can we shape the Trump Administration vaccine plan to fix it or stop it before it does damage,” he announced.