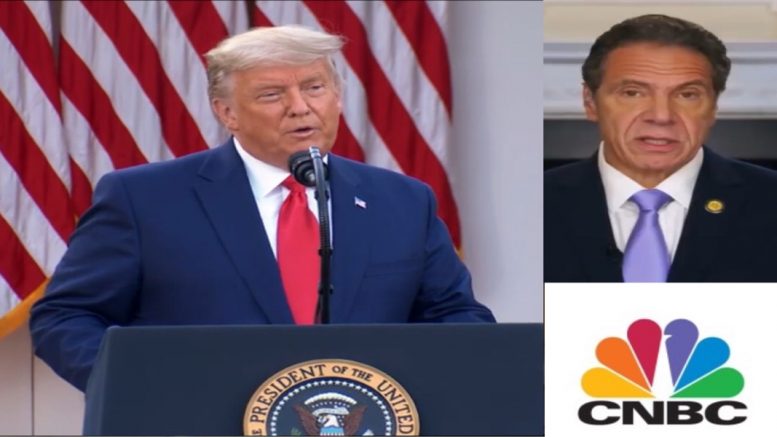 The Commander in Chief held a news conference in the Rose Garden at the White House Friday with an update over Operation Warp Speed and ripped New York Governor Andrew Cuomo over his refusal to accept the vaccine from his administration.

CNBC, however, appeared to mislead America Friday over the president’s full context and remarks regarding the coronavirus vaccine, claiming that President Trump said the “Coronavirus vaccine won’t be delivered to New York”. The network, owned by Comcast, suspiciously left out the rest of the sentence from the president, in which Trump said, “We won’t be delivering it to New York until we have authorization to do so. That pains me to say that.”

CNBC suspiciously mislead America, leaving out the president’s full sentence on the vaccine to NY:

During his remarks in the Rose Garden Friday, the president said of the vaccine: “We will be working on an emergency use authorization, which should be coming down extremely soon. My administration will then coordinate the distribution of the vaccine, and it will be approved, I think, … very, very quickly we hope”.

He noted that a typical vaccine could take up to 8-12 years, but through Operation Warp Speed, “we are doing it in less than one year”, adding that it is “five times faster than the prior vaccine development in history”, emphasizing, “Five time faster, say it again: five time faster. Nobody can believe it actually”.

The Commander in Chief said that the vaccine will be “distributed to frontline workers, the elderly, and high risk Americans immediately in a matter of weeks, ahead of schedule”, adding, “We know this virus primarily targets older populations and those with underlying health conditions. … Millions of doses will soon be going out the door.” Video Below

He noted that “as soon as April, will be available to the entire general population, with the exception of New York state”, clarifying, “For political reasons, the governor decided … he wants to take his time on the vaccine. He doesn’t trust where the vaccine’s coming from.”

“… But he doesn’t trust the fact that it’s this White House, this administration. We won’t be delivering it to New York until we have authorization to do so. That pains me to say that. This is a very successful, amazing vaccine”, the president expressed. [Emphasis added].

During an interview on ACB’s “Good Morning America” Monday, Governor Cuomo told George Stephanopoulos of the vaccine, “Well, it’s good news/bad news, George. The good news is the Pfizer tests look good and we’ll have a vaccine shortly. The bad news is that it’s about two months before Joe Biden takes over and that means this administration is going to be implementing a vaccine plan. The vaccine plan is very important and it’s probably the most ambitious undertaking since COVID began.”

“And the Trump Administration is rolling out the vaccination plan, and I believe it’s flawed. …  I think [Biden’s] first step saying let’s focus on the science, let’s depoliticize testing data, listen to the scientists is the exact opposite of Trump. But you have two months, and we can’t let this vaccination plan go forward the way that Trump and his administration is designing it, because Biden can’t undo it two months later,” Cuomo alleged.

“We’ll be in the midst of it and I’m going– I’ve been talking to governors across the nation about that. How can we shape the Trump Administration vaccine plan to fix it or stop it before it does damage?” the New York governor wondered.

Bill Maher Rips Ted Lieu & Co.’s Outrage Over COVID-19 Being Named From Where It Originated: “Can’t We Even Have A Pandemic Without Being Offended?”