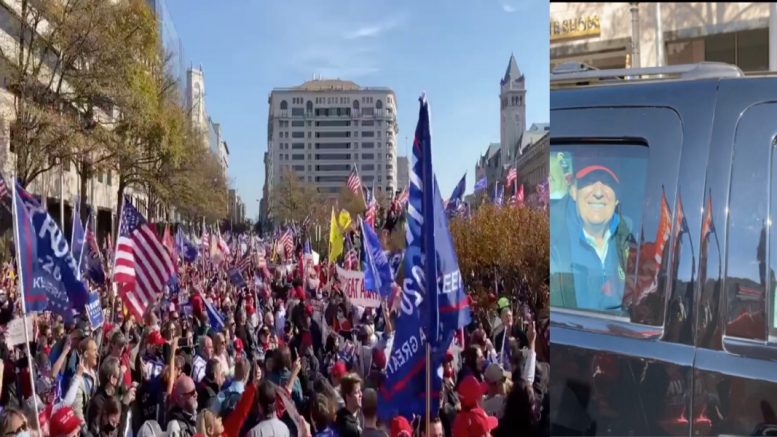 President Donald Trump made a surprise appearance at the “Million MAGA March” in Washington, D.C. on Saturday, as previously reported.

The President followed through on his word, after hinting on Friday that he could be making an appearance at the demonstration, where mass amounts of Trump supporters and conservatives are set to march from the Supreme Court to the White House, with a core focus of “Stop the Steal” of the election.

An aerial view of supporters at the Capitol:

AMAZING! Can hear you all from the West Wing Colonnade. A beautiful day in Washington, D.C. THANK YOU, PATRIOTS!! #MAGA🇺🇸🦅 pic.twitter.com/RJJ8bvYlfr

This is giant. Hundreds of Proud Boys and supporters marching on the streets of DC chanting “FUCK ANTIFA” two hours ahead of the #MillionMAGAMarch. pic.twitter.com/KfZpEq7KYE

Trump supporters back the Blue:

The media has declared Joe Biden the “President-elect”, so thousands of Trump supporters have showed up to Freedom Plaza to remind them that they do not declare elections. #MarchForTrump pic.twitter.com/ckaIjg9OVB

More than one MILLION marchers for President @realDonaldTrump descend on the swamp in support. #MarchForTrump #MillionMAGAMarch2020 pic.twitter.com/Rjs2uVcKGZ

Thank you to all the patriots who came out to show your support for @realDonaldTrump and election integrity! pic.twitter.com/ke37WvxCrt