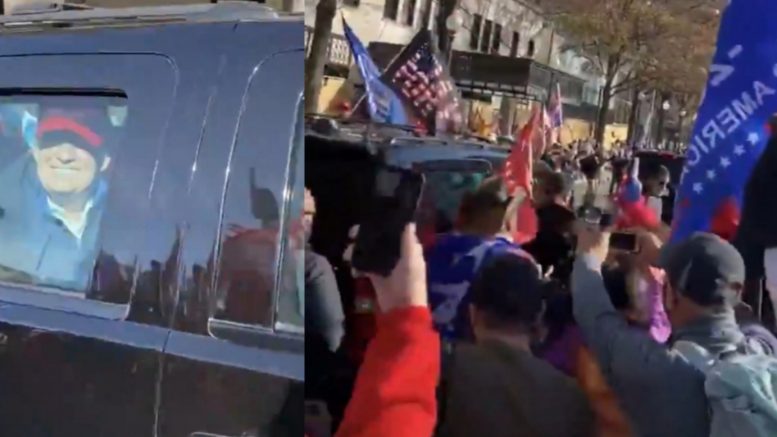 President Donald Trump made a surprise appearance at the “Million MAGA March” in Washington, D.C. on Saturday.

The President followed through on his word, after hinting on Friday that he could be making an appearance at the demonstration, where mass amounts of Trump supporters and conservatives are set to march from the Supreme Court to the White House, with a core focus of “Stop the Steal” of the election.

Related Article: President Trump Hints At Making An Appearance During Saturday’s MAGA March: “I May Try To Stop By & Say Hello”

A video uploaded to social media captured the moment that President Trump’s heavily-armed motorcade drove through a crowd of Trump supporters carrying flags.

In one of the vehicles, the Commander-In-Chief is seen wearing a red hat and smiling at Trump supporters through the window as they screamed out of excitement and chanted “USA!”

Moments later, the President’s social media guru Dan Scavino relayed what Trump said to him after the motorcade passed through.

POTUS @realDonaldTrump just called me from the motorcade and said he passed thousands of Great American Patriots with their American Flags and Trump Flags, just outside the White House, here in Washington, D.C. — he couldn’t believe it! THANK YOU, PATRIOTS!! pic.twitter.com/VdlO7lnqyE

In ending, here is some more footage from the Million MAGA March:

DC: Thousands of Trump Supporters descend upon Freedom Plaza chanting “WE WANT TRUMP” for the “Stop the Steal” March and Rally in support of President @realDonaldTrump pic.twitter.com/xVFdGS1P59

AMAZING! Can hear you all from the West Wing Colonnade. A beautiful day in Washington, D.C. THANK YOU, PATRIOTS!! #MAGA🇺🇸🦅 pic.twitter.com/RJJ8bvYlfr