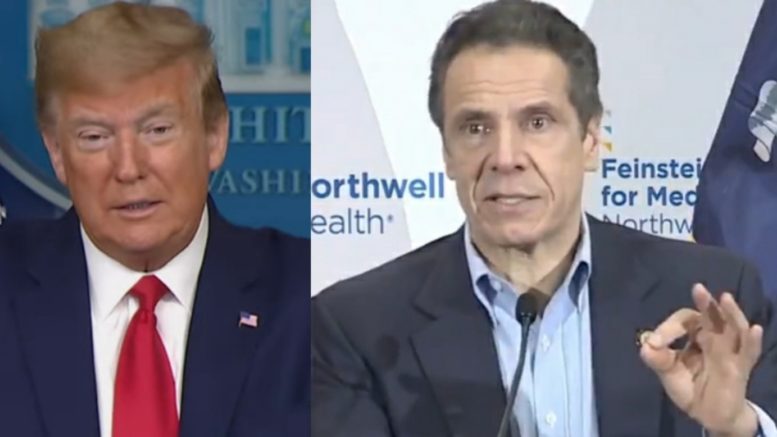 New York Governor Andrew Cuomo had nothing but positive things to say about President Trump and the federal government’s handling of the coronavirus crisis during his Sunday briefing with the press.

Cuomo told reporters that the federal government’s response was a “phenomenal accomplishment” full of “extraordinary efforts and acts of mobilization.”

“Do I have faith in the President? Look, what the federal government did working with states, as I just said, was a phenomenal accomplishment,” Cuomo declared. “We bent the curve, we flattened the curve. Government did it, people did it. But government facilitates people’s actions, right?”

Then after mentioning some core accomplishments, including doubling the hospital capacity in the state of New York and President Trump bringing in troops to build makeshift hospitals, Cuomo reiterated such an efforts by the government was “phenomenal.”

“So, these were just extraordinary efforts and acts of mobilization,” Cuomo proclaimed. “And the federal government stepped up and was a great partner, and I’m the first one to say it.”

“We needed help and they were there,” he added. “State and local governments were fantastic. The hospital system was fantastic. New Yorkers were fantastic, and that is an undeniable fact.” Video Below

Related Article: Gov. Cuomo Responds To Growing Democrat Support For Him To Replace Biden On The Ticket: “Flattering” But “Irrelevant”

He then concluded by mentioning how the overall numbers related to the coronavirus are much lower than what was forecasted by the CDC and other entities.

“What do you owe the variance to?” he asked. “Heroic efforts on behalf of people as facilitated by government — federal and state.” Video Below

Cuomo’s remarks were completely opposite from House Speaker Nancy Pelosi, who had nothing but nasty things to say about President Trumps handling of the crisis.