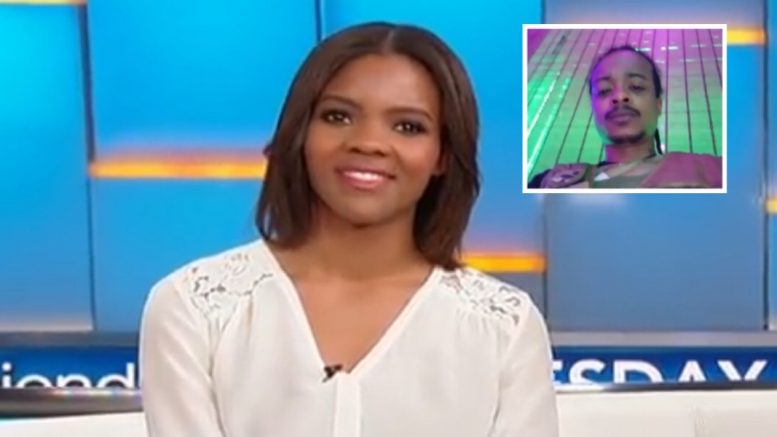 Candace Owens took to Twitter to break her silence over Jacob Blake, who was shot at by a police officer in Kenosha, Wisconsin, and she also slammed Los Angeles Lakers forward LeBron James after NBA players decided to postpone games over the unrest that followed in the streets of Kenosha.

The police union that represents the Kenosha Police Department said that police responded to the scene where Jacob Blake was ultimately shot because he violated a restraining order related to a sexual assault. The cops involved in Blake’s shooting were there to arrest Blake for violating a restraining order stemming from a sexual assault claim, according to the New York Post.

A 911 call Aug. 23 alerted them that Blake, 29, was at the home of his alleged victim. The officers on the scene knew he had an open warrant for felony sexual assault, according to dispatch records and the Kenosha Professional Police Association. That union also claimed Blake was wielding a knife at the time of his arrest. He put one of the arresting officers in a headlock and shrugged off two attempts to taser him, it said.

State investigators have said the knife recovered on the scene was found inside Blake’s vehicle. He was shot in the back seven times by Kenosha police officer Rusten Sheskey as he turned away from police to get in his car.

The restraining order stemmed from a criminal complaint, which was obtained by The Post, that accused Blake of breaking into the home of a woman he knew and sexually assaulting her in May. The victim, who goes by her initials in the paperwork, told police she was asleep when Blake broke in at 6 a.m. and said, “I want my sh-t.” She reportedly told police that Blake used his finger to sexually assault her. The record states she told police the incident “caused her pain and humiliation and was done without her consent” and she was “very humiliated and upset.” Continued Below

The victim then allegedly ran out the front door after Blake. She said she realized her keys were missing and “immediately called 911,” the complaint said. Police filed charges against him for felony sexual assault, trespassing and domestic abuse in July when the warrant was issued for his arrest.

What followed after Jacob Blake being shot at by a police officer were protests, riots, and anarchy. During the third night of civil unrest in the streets of Kenosha, Wisconsin, two people were killed and a third was hospitalized with serious, but not life-threatening injuries.

NBA players postponed their Wednesday games after protests in Kenosha turned deadly late Tuesday when Kyle Rittenhouse, a white 17-year-old allegedly shot and killed two other white people and injured another. Continued Below

Rittenhouse, in video footage, approached officers shouldering an AR-15 semiautomatic rifle after allegedly shooting three people. Rittenhouse raised his arms in what appeared to be surrendering, or possibly signaling that his hands are not on his weapon.

Four armored vehicles, lights flashing, pass Rittenhouse, and several police cruisers can be seen nearby. No one stops Rittenhouse. He was charged Thursday with intentional and reckless homicide.

LeBron tweeted in reference to Rittenhouse:

FUCK THIS MAN!!!! WE DEMAND CHANGE. SICK OF IT

Change doesn’t happen with just talk!! It happens with action and needs to happen NOW! For my @IPROMISESchool kids, kids and communities across the country, it’s on US to make a difference. Together. That's why your vote is @morethanavote ✊🏾 #BlackLivesMatter

Candace Owens broke her silence on Twitter over Jacob Blake’s death by responding first to Megyn Kelly on Thursday, who tweeted an article after evidence unfolded of Blake being armed with a knife when cops shot him, according to the Wisconsin Attorney General.

Yes—but even if a black man is armed with a knife, has a warrant for his arrest over sexually assaulting a minor, threatens to grab another weapon from his car, AND is physically resisting, officers still mustn’t defend themselves or else RACISM.

Owens then pointed out Saturday that Blake is “somehow subsequently worshipped as a victim of injustice” after sexually assaulting a woman and police officers, adding, “#JacobBlake was a violent scumbag”.

“Why does [LeBron James] perpetually use his platform [to] support criminal men who victimize black women?” Owens wondered.

Jacob Blake had an outstanding warrant for *literally* grabbing a woman by the pussy and telling her she smelled like she had been with other men.

Why does @KingJames perpetually use his platform support criminal men who victimize black women?

Black Lives Matter and Antifa activists are what happen when a society gives birth to an entire generation of spoiled rotten brats who have never experienced any real suffering. pic.twitter.com/tiHJUNE5iT