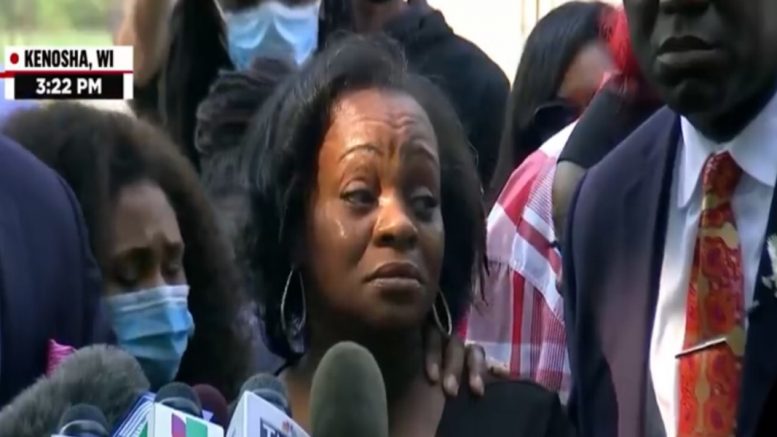 Jacob Blake, who was shot multiple times by police in Kenosha, Wisconsin and which has set off two nights of unrest and looting, prompted his mother to plead for calm and “healing” on Tuesday.

“As I was riding through here, this city, I noticed a lot of damage and it doesn’t reflect my son or my family. If Jacob knew what was going on, as far as that goes, the violence and the destruction, he would very unpleased. So I’m really asking, and encouraging everyone in Wisconsin and abroad to take a moment and examine your hearts,” Julia Jackson told reporters outside the Kenosha County Courthouse.

“Citizens, police officers, firemen, clergy, politicians– do Jacob justice on this level and examine your hearts. We need healing. As I pray for my son’s healing, physically, emotionally, and spiritually, I also have been praying, even before this, for the healing of our country,” Jackson said. “God has placed each and every one of us in this country, because he wanted us to be here.”

She went on to say: “Clearly you can see by now, I have beautiful brown skin, but take a look at your hand, and whatever shade it is, it is beautiful as well. How dare we hate what we are. We are humans. God did not make one type of tree or flower or fish or horse or grass or rock. How dare you ask him to make one type of human that looks just like you.”

“I’m not talking to just Caucasian people, I am talking to everyone,” Jackson said. “White, Black, Japanese, Chinese, Red, Brown. No one is superior to the other. The only supreme being is God himself.”

“Please, let’s begin to pray for healing for our nation,” she pleaded. “We are the United States. Have we been united? Do you understand what’s gonna happen when we fall, because a house that is against each other cannot stand.” Continued Below

Julia Jackson also said that she is “praying” for the police officers and their “families”.

“To all of the citizens, my black and brown sisters and brothers, I’m praying for you. I believe that you are an intelligent beings just like the rest of us. Everybody, lets use our hearts, our love and our intelligence to work together to show the rest of the world how humans are suppose to treat each other. America is great when we behave greatly,” she added. Video Below

Meanwhile, Julia Jackson spoke with Don Lemon on CNN Tuesday, saying, “Please don’t burn up property and cause havoc … in my son’s name. People shouldn’t do it anyway. But to use my child or any other mother or father’s child, our tragedy to react in that manner is just not acceptable”.

Jacob Blake’s mom on violence in Kenosha: "My family and I are very hurt. And quite frankly disgusted. And as his mother, please don’t burn up property and cause havoc and tear your own homes down in my son’s name. You shouldn’t do it. … it’s just not acceptable.” pic.twitter.com/T00Fg5MOvj

Alyssa Milano On Her Positive COVID Antibody Test: “Government Should Be Our Communal Caretakers”

Stelter Says Gorsuch Appeared On Fox To ‘Goose Sales’ Of His Book, Instantly Gets Called Out: ‘Dumbest Person In All Of Media’