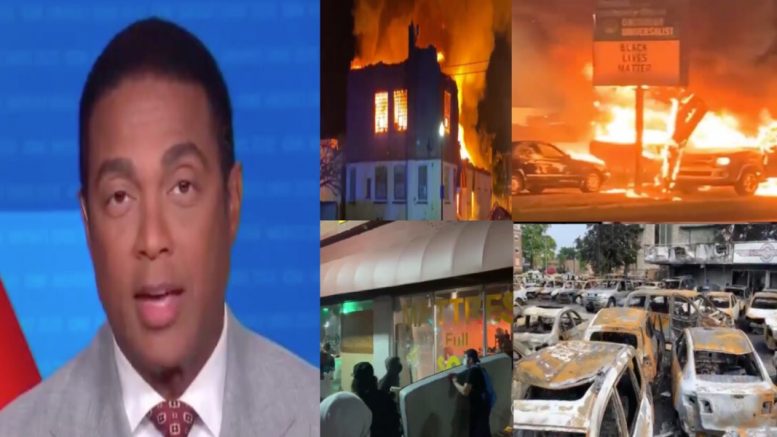 Tuesday night on CNN, host Don Lemon said that Democrats “ignoring” riots, which are occurring across some cities in the U.S., represent a “blind spot” for the party, and he called on Democratic presidential nominee Joe Biden to address the problem, because it is “sticking” in polling and focus groups.

“I think this is a blind spot for Democrats. I think Democrats are ignoring this problem or hoping that it will go away, and it’s not going to go away,” Don Lemon said. “The problem is not gonna be fixed by [Election Day]. But what they can do, and I think maybe Joe Biden may be afraid to do it … he’s got to address it.”

He continued: “He’s got to come out and talk about it. He’s gotta do a speech like Barack Obama did about race. He’s gotta come out and tell people that he is going to deal with the issue of police reform in this country. And that what is happening now, is happening under Donald Trump’s watch, on Donald Trump’s watch. [When Biden] is the president, Kamala Harris is the vice president, then they will take care of this problem.”

“Guess what? The rioting has to stop. Chris [Cuomo], as you know and I know, it’s showing up in the polling. It’s showing up in focus groups. It is the only thing … right now that is sticking,” Lemon warned.

President Trump has positioned himself as a law-and-order candidate in an attempt to draw a contrast with Biden, often pointing to violent protests in Democratic-led cities such as Minneapolis, Seattle, Portland, Atlanta, New York, Chicago, The Hill reported. Continued Below

“I STAND FOR LAW AND ORDER AND I TOOK ACTION!” Trump tweeted Thursday evening, during the Democratic National Convention, adding, “Operation LeGend has led to the arrest of over 1,000 criminals, including 90 killers, all while Sleepy Joe Biden and the Radical Left excuses violence and crime in their Democrat-run cities. I want safety & security, Joe allows CRIME!

Deadly violence broke out during the third night of civil unrest in Kenosha, Wisconsin. Two people were killed, and a third was hospitalized with serious, but not life-threatening injuries, the Kenosha Police Department said in a statement.

Videos surfaced after shootings unfolded following a conflict that broke out between demonstrators and self-styled militias guarding a gas station. Video Below

CNN’s Don Lemon says that the riots across the country have to stop because it might hurt the Democrats’ chances in November:

We leave you with some of the video that surfaced from Kenosha, Wisconsin:

The #KenoshaGuard militia is on the streets to protect their city since the local and state governments are allowing the Marxist uprising to continue. pic.twitter.com/0euVaBhGE1

.@Julio_Rosas11 recorded shocking footage of rioters trying to beat up someone with a rifle. The person trips and then a bunch of shots can be heard. #KenoshaRiots pic.twitter.com/ntmU6d6ZNM

The guy in this video helping the man who had just been shot is Daily Caller reporter @RichieMcGinniss.

Literally taking the shirt off his back to help save his life.pic.twitter.com/P59hoUDYj6

Here’s video of the man’s wounds, I recorded him being shot in Kenosha. His right arm is badly damaged. Credit: @ louriealex (instagram) pic.twitter.com/iE8vUG27mb