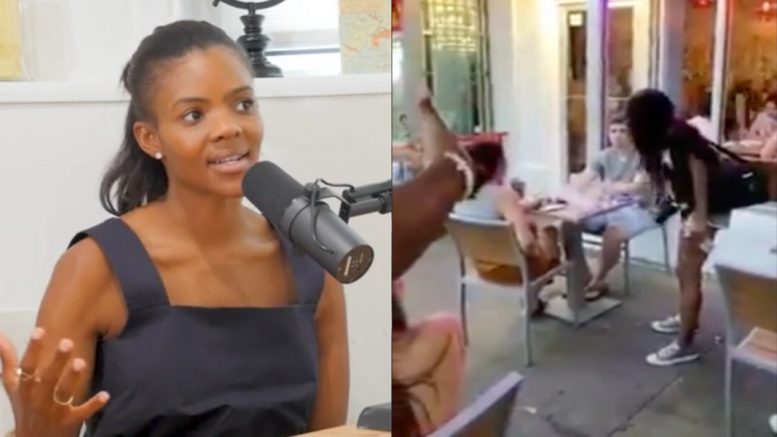 A Black Lives Matter activist in Washington, DC was seen in viral video on Twitter screaming at a couple who was dining on the patio outside at a restaurant. The restaurant diners allegedly were not complying with BLM’s demand to raise their fists in the air.

Candace Owens reacted on Tuesday by expressing her disgust to what she witnessed in the video and warned her followers, “Black Lives Matter is a hate group”.

BLM scumbags demand that diners at restaurant raise their fists for black power. Brave young couple retains dignity, refuses. Be that couple. Don’t be the embarrassing mustachioed coward to the right who has forfeited his dignity for all time.

Candace Owens expressed her disgust regarding video of the BLM activist and wrote on Twitter: “This is absolutely despicable and needs to go viral.”

“Black Lives Matter is a hate group. To every white person that was too stupid to see it in the beginning — wake up. To every black person who has had the spine to stand against them from the beginning—keep fighting,” she recommended.

Owens added: “Someone please find out for me who this couple is— I would like personally gift them with a vacation for two. Somewhere OUT of America.” Continued Below

Someone please find out for me who this couple is— I would like personally gift them with a vacation for two.

Somewhere OUT of America.

The protest appears to have occurred within the last couple days in D.C.

D.C. Protesters were also seen in video appearing to intimidate a white woman dining outside, screaming “white silence is violence!”

A young child was also filmed submitting to the mob:

(Related: Mark Levin To BLM Leader: “What Exactly Are You Gonna Burn Down, Tough Guy? I’m Sick & D–n Tired Of It”)

Father To Pull 2nd Grader Out Of School After Discovering She’s Being Taught “White People Are Bad, Mean & Racist”