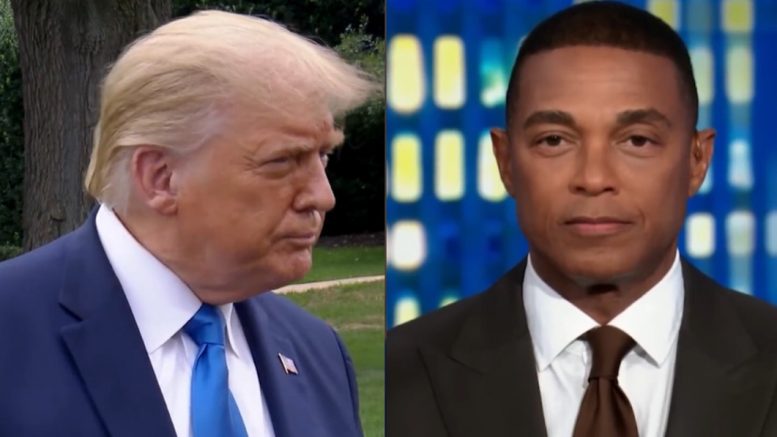 45th President Donald J. Trump mocked Don Lemon on Tuesday, reiterating that the left-leaning primetime CNN anchor is the “dumbest man on TV” — amid Lemon’s upcoming role on a morning show and the cancelation of his solo “Don Lemon Tonight”.

“A small step for television, a giant step for mankind. Don Lemon, often called ‘the dumbest man on television’ having made even Lebron James look smart during their interview two years ago, has been FIRED from his prime time evening spot on CNN – extremely low ratings – and will be thrown into their ‘Death Valley’ morning show,” President Trump wrote on Truth Social.

“I assume this means a BIG salary cut prior to his Complete & Total future firing from Ratings Challenged (to put it mildly!) CNN. Good luck Don, you’ll need it! MAGA!!!” he added.

In August, 2018, after apparently watching an interview with Lebron James and Don Lemon, Trump referenced NBA legend Michael Jordan on Twitter — before his account was suspended from the social media platform. “Lebron James was just interviewed by the dumbest man on television, Don Lemon. He made Lebron look smart, which isn’t easy to do. I like Mike!” he expressed.

In a second post on Monday, Trump pointed out Lemon’s low ratings while bragging about his own. “They call me a ‘ratings machine.’ Don Lemon was also a ratings machine – in reverse. He killed ratings, ate them alive, and always will,” he wrote on Truth Social.

“If he interviewed Elvis, back from the dead, nobody would watch. Add him to the list of Joe Scarborough and his lovely, soothing bride. They are in the ‘can’ also, but now can compete against ‘the dumbest man on television.’ Should help them a lot!!!” the 45th President suspected.

Lemon — who often espoused his liberal opinions on his 10 p.m. show “Don Lemon Tonight” — helmed the lowest-ranked program in primetime in August, averaging 660,000 viewers to finish a distant third to Fox and MSNBC, Alexandra Steigrad at the New York Post reported.

In 2019, Trump also called Lemon “the dumbest man on television” after the CNN host took what appeared to be cheap shots at the 45th Commander in Chief during a Democratic presidential debate. As one of three moderators during the debate, Lemon questioned Sen. Amy Klobuchar (D-MN) about Trump voters who “prioritize the economy over the president’s bigotry”.

“What do you say to those Trump voters who prioritize the economy over the President’s bigotry?” Don Lemon had asked Amy Klobuchar during the debate.

“There are people that voted for Donald Trump before that aren’t racist; they just wanted a better shake in the economy. And so I would appeal to them,” Klobuchar said. “But I don’t think anyone can justify what this president is doing. Little kids literally woke up this weekend, turned on the TV, and saw their president calling their city, the town of Baltimore, nothing more than a home for rats. And I can tell you, as your president, that will stop,” Klobuchar responded.

President Trump responded on Twitter to Lemon’s apparent bias, writing, “CNN’s Don Lemon, the dumbest man on television, insinuated last night while asking a debate ‘question’ that I was a racist, when in fact I am ‘the least racist person in the world.’”

“Perhaps someone should explain to Don that he is supposed to be neutral, unbiased & fair, or is he too dumb (stupid} to understand that. No wonder CNN’s ratings (MSNBC’s also) have gone down the tubes – and will stay there until they bring credibility back to the newsroom. Don’t hold your breath!” Trump added.

Related: Don Lemon On His Trump Friends: “I Just Had To Get Rid Of A Lot Of People In My Life… They Have To Hit Rock Bottom Like An Addict”