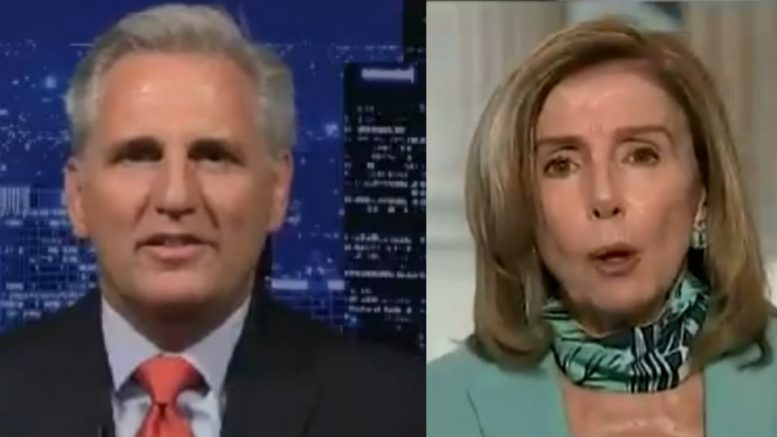 Pelosi made the incendiary remark while accusing President Trump and his “allies in Congress” of trying to “diminish the role of the postal system” in the 2020 election.

Related Article: VP Pence To US Governors: “Call Nancy Pelosi & Call Chuck Schumer & Tell Them To Get Off The Dime”

“They’re trying to interfere in our election,” Nancy Pelosi claimed. “But they’re not the only ones. We take an oath to protect and defend the Constitution from all enemies, foreign and domestic. And sadly, the domestic enemies to our voting system and honoring our Constitution are right at 1600 Pennsylvania Avenue with their allies in the Congress of the United States.”

“But again, let’s just get out there and mobilize, organize, and not let the President deter anybody from voting, and again, support the postal system which is election central. They’re doing everything they can, suppress the vote with your actions, scare people and intimidate by saying law enforcement will be there, diminish the role of the postal system and all of this. It’s really actually shameful, and enemies of the state,” Pelosi alleged.

During her Saturday night program, Judge Jeanine Pirro pressed McCarthy on what he thought about Pelosi’s remarks.

“This is no different when four years ago they called us ‘deplorables’,” McCarthy told Judge Jeanine. “They call the President, they call you, they call me, they call everyone who believes like the President. Now we’re domestic enemies?”

“This is why it’s so important 67 days from now because it’s not just to elect this President if you don’t win the House as well,” he declared. “People need to go to TakeTheHouse.com cause we need to retire Nancy Pelosi cause she’s the one who led impeachment, wasted their entire majority. She’s the one who continues to do this to thank the American public — that Americans are domestic enemies because they don’t think like San Francisco.”

“It’s no longer Republican versus Democrat. It’s socialism versus freedom,” he concluded. Video Below

One of the most heartbreaking moments at the convention was hearing Kayla Mueller's grief-stricken parents talk about her vicious murder at the hands of ISIS. @GOPLeader is on “Justice” to discuss this and much more. pic.twitter.com/NKKdC1RfPP

While Stumping In Cleveland, Sen. Harris Gets Caught On The Hot Mic Asking ‘Are We In Cleveland?’