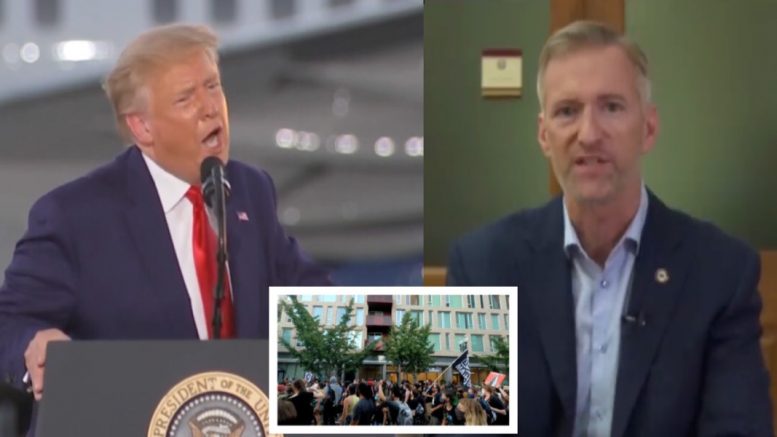 The Commander in Chief took to Twitter Friday afternoon wondering if Portland is “listening” after the National Guard “moved in” to help assist Kenosha, Wisconsin, noting “no further violence” has occurred, following unrest in the city after Jacob Blake was shot by a police officer.

“Success: Since the National Guard moved into Kenosha, Wisconsin, two days ago, there has been NO FURTHER VIOLENCE, not even a small problem. When legally asked to help by local authorities, the Federal Government will act and quickly succeed. Are you listening Portland?” President Donald Trump asked. Continued Below

Following the Commander in Chief’s Friday tweet, Democratic Mayor of Portland, Oregon, Ted Wheeler, took to twitter to announce that he sent a letter President Trump “declining his recurring offer to aid Portland by sending federal enforcement to the city.”

“Yet again, you said you offered to aid Portland by sending in federal law enforcement to our city. On behalf of the City of Portland: No thanks,” Wheeler wrote. “We don’t need your politics of division and demagoguery. Portlanders are onto you. … There is no place for looting, arson, or vandalism in our city. There is no room here for racist violence or those who wish to bring their ideology of hate into our community.

“When you sent the Feds to Portland last month, you made the situation far worse. Your offer to repeat that disaster is a cynical attempt to stoke fear and distract us from the real work of our city. Stay away, please,” he added.

Meanwhile, the Commander in Chief fired back early Saturday morning at Wheeler, informing the Portland mayor that “if lives are endangered, we’re going in!” Continued Below

Today, I sent this letter via email to @realDonaldTrump declining his recurring offer to aid Portland by sending federal enforcement to the city. https://t.co/W85EDfriyk pic.twitter.com/CC1IWTp5k8

The Commander in Chief fired back early Saturday morning:

A modified street sign on the corner of Northwest 10th and Glisan with ACAB and BLM stickers outside Mayor Ted Wheeler's apartment building. pic.twitter.com/vqPVrxnjiy

A protester tries to get into Mayor Ted Wheeler's apartment building where three activists have locked arms. "I got white people shit to do in there!!" pic.twitter.com/2UumWkDOM7

The block party protest calling for the Portland Portland police bureau to be defunded outside Ted Wheeler’s apartment building is in full swing. pic.twitter.com/QexP8Ns06g

After occupying area outside @tedwheeler’s condo, #antifa have returned to rioting. They have shut down the street in north Portland and started fires on the street again. #PortlandRiots pic.twitter.com/bm367ufiOc

Antifa and BLM are flashing strobe lights into @tedwheeler’s condo building in NW Portland. They’re also hosting a metal concert on the street, blocking the road. In the condo lobby, occupiers have chained themselves together demanding he resign. pic.twitter.com/pdP7CUzUnf

Rioters are vandalizing @tedwheeler’s condo building with what looks like red paint. #PortlandRiots