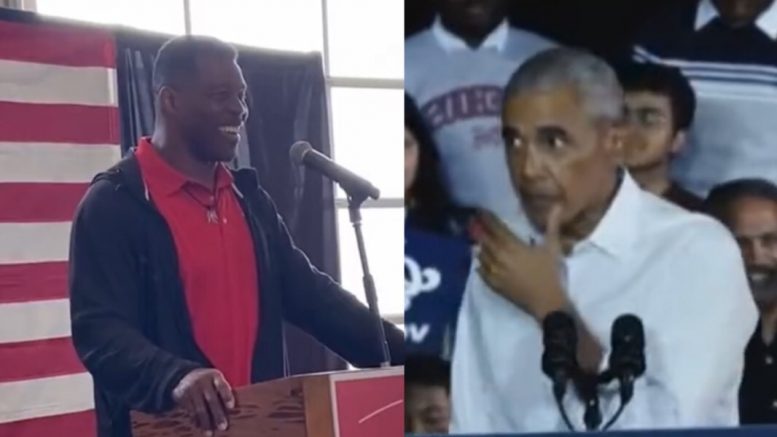 Obama took aim at Walker, claiming the Heisman trophy winner is “a celebrity who wants to be a politician.”

“President Obama was here last night. He said I’m a celebrity. He got that one wrong, didn’t he? I’m not a celebrity, I’m a warrior for God. He got something else wrong, too. Remember two years ago he told us to vote for Joe Biden, didn’t he? He got that one wrong, did he not? He’s lost twice to Georgia already, hasn’t he, so I think he probably needs to sit this one out,” Walker said Saturday.

Walker said he would pray for the former president and concluded that “he got with the wrong horse” by supporting his Democratic challenger, incumbent Senator Raphael Warnock (D-GA).

“I’m sorry to tell former President Obama, I’m sorry, I’m gonna pray for him,” Walker said. “I’m gonna pray for him, because he needs some help. He needs some help because he got with the wrong horse. Senator Warnock is the wrong horse. You know he can’t do the job, and it’s time for him to leave. So don’t let the door hit your butt as you walk out of there.”

Obama noted that “Herschel Walker was a heck of a football player, one of the best running backs of all time”, but asked the audience in Georgia, “Does that make him the best person to represent you in the United States Senate?”

Former President @BarackObama: "Let's say you're at the airport and you see Mr. Walker and you say, ‘Hey, there's Herschel Walker, Heisman winner. Let's have him fly the plane.’ […] Seems to me he's a celebrity who wants to be a politician and we've seen how that goes.” pic.twitter.com/lzT0mEWhFO

Herschel Walker responds to Obama's criticisms of him last night:

"Where has he been? He's been in his nice house [while nobody can afford gas or groceries]." pic.twitter.com/SWjwudCOUw

Related: Trump Announces His Endorsement For Herschel Walker For Senate; Walker Reacts: “THANK YOU To My Friend President Trump”