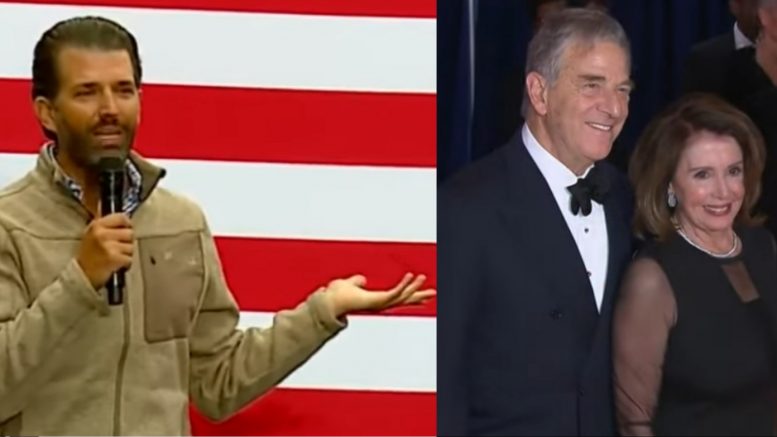 Donald Trump Jr. issued a statement on his social media accounts in wake of the attack of House Speaker Nancy Pelosi’s husband, Paul Pelosi, at their San Francisco residence.

“San Francisco Police Chief William Scott said that the suspect, David DePape, 42, now faces charges of attempted homicide, assault with a deadly weapon, elder abuse, burglary and other felonies in relation to the attack, which happened after 2 a.m. on Friday,” CNN reported.
“The break-in raises concerns about the safety of members of Congress and their families. Capitol Police are responsible for Nancy Pelosi’s security and the security of other members of Congress, but lack the resources to protect lawmakers’ families around the clock.”

Trump Jr. pondered how much safer America would be if the Democratic Party gave equal attention and concern to all violent crime across the country as they have with the latest incident surrounding the Pelosi’s.

“Imagine how safe the country would be if democrats took all violent crime as seriously as they’re taking the Paul Pelosi situation,” wrote Trump Jr. “They simply don’t care about you.”

Imagine how safe the country would be if democrats took all violent crime as seriously as they’re taking the Paul Pelosi situation. They simply don’t care about you.