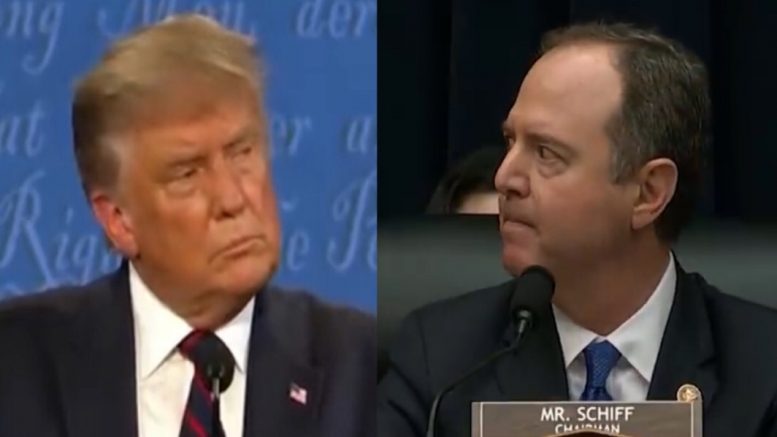 “I think there’s a real desire on the part of the attorney general, for the most part, not to look backward. Do I disagree with that? I do disagree with that, and I disagree with it most vehemently when it comes to what I consider even more serious offenses,” Schiff said, appearing to vent his irritation over the matter, on the podcast.

Asked about Attorney General Merrick Garland’s reluctance to revive old investigations or pursue new ones that focused on 45th President Donald Trump, including the 2018 report by former special counsel Robert Mueller, Schiff said, “In my view, you don’t ignore the crimes that have been committed by a president of the United States. They need to be investigated.”

“You may reach the judgment once you’ve investigated something that the public interest in not prosecuting a former president outweighs the interests of justice. But I don’t think you could ignore the crimes,” Schiff said. He called the 2018 report “a factual basis to charge the president with multiple crimes of obstruction.”‘

In 2018, Mueller’s team did not charge President Donald Trump or anyone on his campaign with coordinating with the Russian government.

Schiff also remarked over the January 6 congressional committee, claiming, “For example, a taped conversation of Donald J. Trump on the phone with Brad Raffensperger, the secretary of state from Georgia, trying to coerce him into fraudulently finding 11,780 votes. Because I think if you or I did that, we’d be under indictment by now”. Continued Below

In an email statement on Saturday, 45th President Donald Trump slammed Rep. Schiff, calling him a “sleezeball that has no credibility”.

“Do you believe that Shifty Adam Schiff is on the Committee concerning the 2020 protest when he was the one that scammed America and the World on the Russia, Russia, Russia Hoax?” the former president asked.

“He’s a sleezeball that has no credibility and is so bad for our Nation!” Trump expressed. Continued Below

On Sunday, Rep. Schiff claimed, “Trump issued a statement attacking me. Out of the blue”.

Late last night, Trump issued a statement attacking me. Out of the blue.

He is evidently very upset my book is doing so well.

One new reason to buy Midnight in Washington?

It will really piss off Donald Trump.

Pick up your copy here: https://t.co/0FgEnvNZF0

"Do you believe that Shifty Adam Schiff is on the Committee concerning the 2020 protest when he was the one that scammed America and the World on the Russia, Russia, Russia Hoax? He’s a sleezeball that has no credibility and is so bad for our Nation!" pic.twitter.com/TZK43VUvtZ

Trump added in an additional statement on Saturday:

"Anybody that doesn’t think there wasn’t massive Election Fraud in the 2020 Presidential Election is either very stupid, or very corrupt!" pic.twitter.com/QFjeJHt2SP

Schiff previously appeared to vent his frustration last month over the attorney general not investigating a phone call between Trump and Georgia Secretary of State Brad Raffensperger during an interview on CNN.

@RepAdamSchiff: "I am concerned that there does not appear to be an investigation, unless it's being done very quietly by the Justice Department" pic.twitter.com/ZPmqVqr1Pc

Meanwhile, the 45th President had issued a statement in March, demanding a “strong investigation” following a retraction from far-left Washington Post, who falsely claimed that Trump, in a phone call with Frances Watson, chief investigator with the Georgia Secretary of State’s office, had asked to “find the votes”, as previously reported by The Freedom Times.

Trump Calls out ‘Two Standards of Justice’ in Classified Doc Probes: Biden is Being Given White Glove Treatment