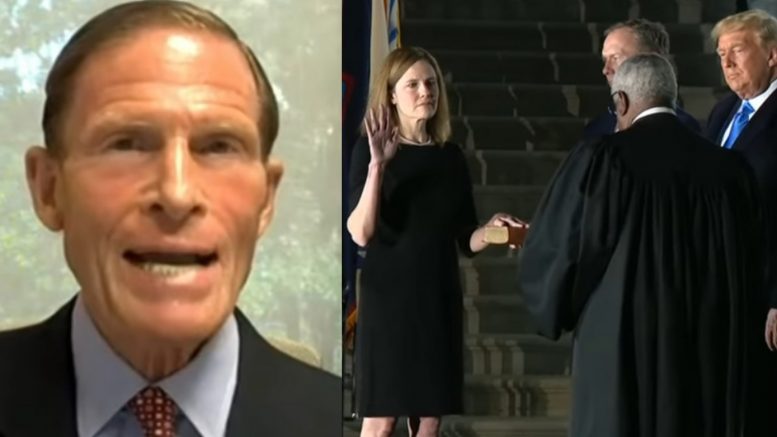 After the 52‐48 Senate vote that confirmed Barrett to the high court, Blumenthal posted a thread of tweets where he suggested that there is now a “clear & present danger of a humanitarian, moral & constitutional crisis.”

“There is a clear & present danger of a humanitarian, moral, & constitutional crisis, as the Supreme Court shifts radically to the right & prepares to strike down laws vital to health & American values. Americans across the country are scared & saddened tonight.

“Families with sick children are scared they won’t be able to pay for their health care if the Affordable Care Act is struck down. Women are scared the Supreme Court will overturn Roe v. Wade & punish them for their decisions about when & whether to have children.

“LGBTQ+ couples are scared that their loving relationships will no longer be protected by law. All Americans should be scared of a Supreme Court that would supplant the electoral will of the people with the votes of Republican-appointed justices.

“To every person who is worried about what your future looks like under this SCOTUS: I’ll never stop fighting for you. Breaking the rules/norms to appoint activist judges who legislate from the bench is undemocratic & unacceptable. Keep on standing up & speaking out.”

Sen. Blumenthal has been highly vocal against Justice Barrett since she was nominated by President Donald Trump, and he even made the threat that “nothing is off the table” if Senate Republicans “force a SCOTUS vote before the election.”

“If Republicans recklessly & reprehensibly force a SCOTUS vote before the election—nothing is off the table,” Sen. Blumenthal tweeted back in September.

One of the maneuvers that is on the “table” Blumenthal is referring to, includes the highly controversial tactic of packing the Supreme Court with liberal judges if Democrats take over the Senate and office of the presidency in November.

With that said, Sen. Blumenthal appears to be planting the seed for the prospects of court packing in his latest round of fear-filled remarks.