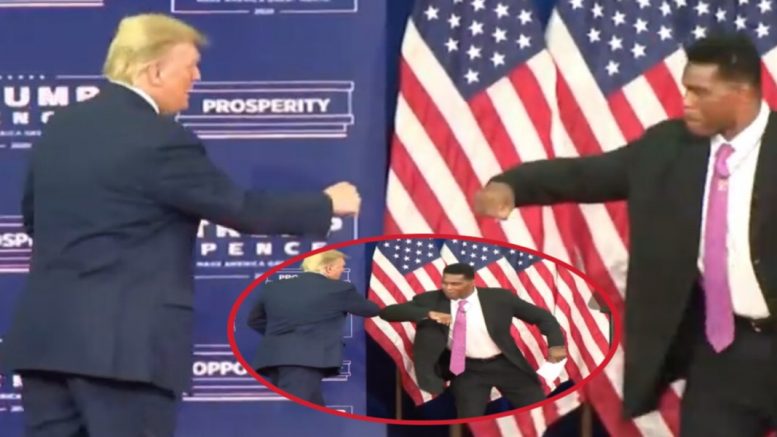 45th president Donald J. Trump announced via email from his “Save America” PAC on Thursday his endorsement for former NFL running back Herschel Walker, who is running as a Republican for the United States Senate in Georgia.

Walker — who is a Trump Republican– is poised to face off against other candidates in Georgia’s Republican primary race that will decide who will challenge Democratic Sen. Raphael Warnock in 2022 — a contest that is critical to GOP’s effort to take back the Senate, as previously reported by The Freedom Times.

Herschel Walker is a friend, a Patriot, and an outstanding American who is going to be a GREAT United States Senator. He embodies “America First” and the winning spirit of Georgia.

Herschel is tough on Crime and Borders, and he will always stand in support of Law Enforcement, Military, and our Vets. He will fight hard for our Second Amendment and Voter Integrity. Herschel Walker will never let you down.

He was a great football player and will be an even better U.S. Senator—if that is even possible. He has my Complete and Total Endorsement! Continued Below

Georgia Senate candidate Herschel Walker thanked the former president, writing in tweet on Thursday, “THANK YOU to my friend President Trump for your support and encouragement! Together, we will win back the U.S. Senate for GEORGIA!!”

THANK YOU to my friend President Trump for your support and encouragement! Together, we will win back the U.S. Senate for GEORGIA!! 🇺🇸🇺🇸🇺🇸https://t.co/eP4PlIhWUI pic.twitter.com/9lI4SvaEkI

Earlier on Thursday, Walker reported he is “already being attacked”:

I've been in the race for barely a week and am already being attacked. We shouldn't be surprised. I LOVE GEORGIA and this country too much to stay out of the fight!! https://t.co/eP4PlIhWUI

Herschel Walker’s son, Christian Walker also weighed in after the 45th President’s endorsement for his father, writing on Twitter, “President Trump has officially ENDORSED my father, Herschel Walker, for the United States Senate. This is the race that will potentially turn the Senate RED.”

President Trump has officially ENDORSED my father, Herschel Walker, for the United States Senate. This is the race that will potentially turn the Senate RED.

Herschel Walker released a campaign video last week, saying in part, “If you want it bad enough, you work for it, you can get it. You might stumble, make mistakes, but you only fail if you give up.”

I am just a kid from Wrightsville, Georgia, who has lived the American Dream. Now, I’m running as a Republican for the United States Senate to keep that dream alive for everybody. To join the fight, visit https://t.co/J4UbhIPvuU pic.twitter.com/e1ZX5PHdVY

(Related: Maxine Waters Says She Will ‘Never Forgive’ Black Trump Voters, Herschel Walker Reacts: “Why Is Nobody Checking Her Out?”)