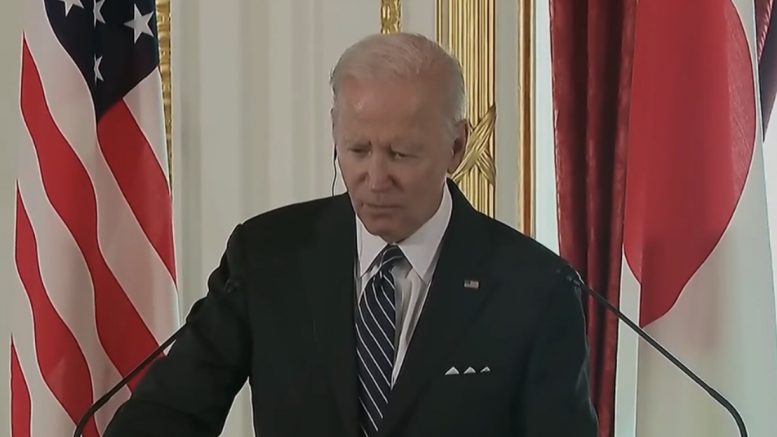 While speaking with reporters during a press conference in Tokyo on Monday, Joe Biden was asked, “In your view, is a recession in the United States inevitable?

In response, the Democrat career politician claimed, in part, over the rising gas prices, “we’re going through an incredible transition”, suggesting that America and “the world” will be “less reliant on fossil fuels”.

“When it comes to the gas prices, uh, we’re going though an incredible transition that is taking place that, God willing, when it’s over, we’ll be stronger and the world will be stronger and less reliant on fossil fuels, when this is over,” Biden alleged.

Joe Biden: "When it comes to the gas prices, we're going through an INCREDIBLE transition" pic.twitter.com/8TGnc7vFa8

The average price per gallon of gasoline hit a record $4.59 on Monday, which is 47 cents more than a month ago, and all 50 states average prices above $4 per gallon, according to AAA.

Earlier in the month, the Biden administration canceled three pending oil and gas drilling leases in Alaska and the Gulf of Mexico amid gas prices surging to record highs.

Energy Secretary Jennifer Granholm admitted that gas prices will stay above $4 a gallon for the rest of the year.

Biden Energy Secretary Jennifer Granholm says gas prices will stay ABOVE $4/gal for the rest of the year.

“The prices are not gonna come down in the next few months.” pic.twitter.com/tQMIWHzoUU

Meanwhile, during the 2020 campaign, Joe Biden said that his administration would “transition from the oil industry” and repeatedly called for no new drilling on public lands, as previously reported by this publication.