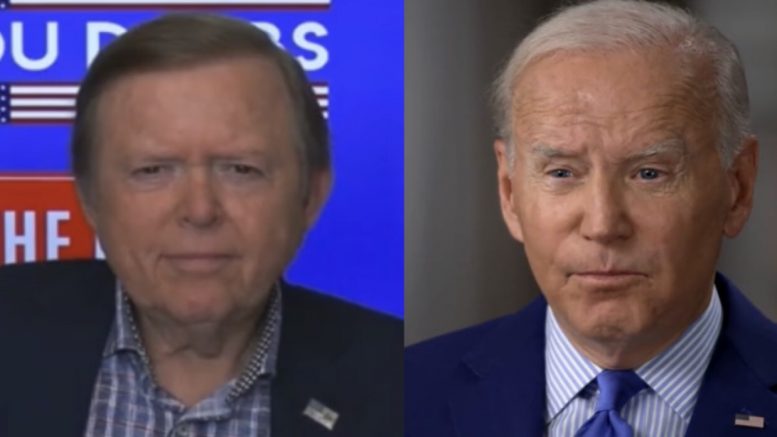 Lou Dobbs, host of “The Great America Show”, reacted Monday to remarks made by Joe Biden during a CBS “60 Minutes” interview, in which the 79-year-old career Democrat maintained that the United States would militarily defend Taiwan from China’s ruling communist party, in the event of an invasion.

When asked during the interview whether he would commit U.S. troops to the defense of Taiwan, as opposed to the economic measures he has committed to Ukraine, Biden replied, “Yes.”

President Biden tells 60 Minutes that U.S. men and women would defend Taiwan in the event of a Chinese invasion. However, after our interview, a White House official told us that U.S. policy on Taiwan has not changed. https://t.co/ANg54LifSH pic.twitter.com/V5qjoqF36T

Lou Dobbs reacted the video of clip of Joe Biden’s comment and the White House appearing to walk back his statement, wondering, “Which one is it?”

“Does Joe Biden and [the] White House stand with China or Taiwan?” Dobbs asked on Twitter.

So which one is it? Does @JoeBiden and @WhiteHouse stand with China or Taiwan? #TheGreatAmericaShow https://t.co/B7rMH48xxC

Though the United States does not maintain formal diplomatic ties with Taiwan and has sworn not to unilaterally champion the island’s independence, it is legally bound by the Taiwan Relations Act of 1979 to provide Taiwan with the arms necessary for self-defense, NTD noted.

“We are willing to do our best to strive for peaceful reunification,” said the CCP’s foreign ministry spokeswoman Mao Ning. “At the same time, we will not tolerate any activities aimed at secession.”

On the contrary, Taiwan’s foreign ministry expressed gratitude to Biden for reaffirming the “U.S. government’s rock-solid security commitment to Taiwan.”

Jesse Watters: ‘America’s a Mess, and Our Fearless Leader… Nowhere to Be Found’

Bongino’s Bold Message To Biden: ‘You Failed – You Are A Total, Epic, Colossal, Apocalyptic Failure’