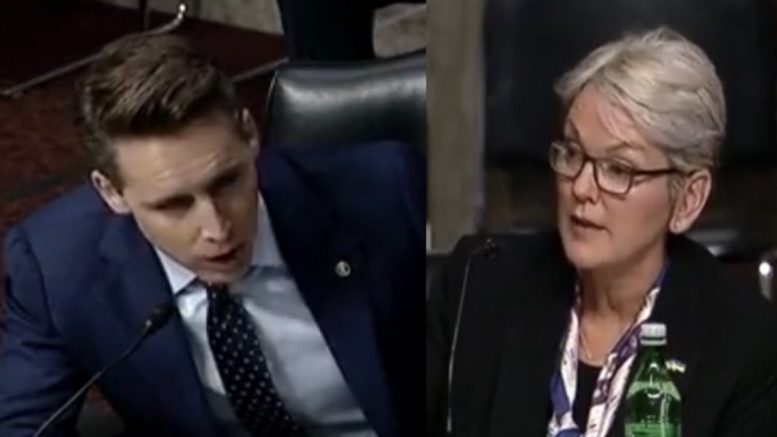 Sen. Josh Hawley (R-MO) confronted Secretary of Energy Jennifer Granholm on Thursday over the rising energy costs and described out how Joe Biden canceled American energy independence when he first came to office.

Granholm, however, denied the administration’s responsibility and placed blame on Vladimir Putin for invading Ukraine.

Senator Hawley told Granholm that AAA is projecting that gas prices will hit a national average of $6 a gallon nationwide by the month of August and wondered if it is acceptable.

“No, it is not. And you can thank the activity of Vladimir Putin for invading Ukraine…” she replied.

“In January of 2021, the average gas price in my state was $2.07. Eight months later … long before Vladimir Putin invaded Ukraine, that price was up over 30%, and it’s been going up consistently since. What are you doing to reverse this administration’s policies that are drawling down our own supply of energy in this country that are throttling oil and gas production in the United States of America? What are you doing about it?” he asked Granholm. Continued Below

“It is not administration policies that have affected supply and demand,” Granholm claimed, as Hawley asked, “How can you say that when the price of gas was up over 30% from January to August.”

“… Here’s what your president did when he first came to office: He immediately reentered the Paris Climate Accord. He canceled the Keystone Pipeline. He halted leasing programs in ANWR. He issued a 60-day halt on all new oil and gas leases and drilling permits on federal lands and waters. That’s nationwide. That accounts, by the way, for 25 percent of U.S. oil production,” Hawley explained.

“He directed federal agencies to eliminate all supports for fossil fuels. He imposed new regulations on oil and gas and methane emissions. Those were all just in the first few days. Are you telling me that had no effect on our energy supply?” he asked. Continued Below

“Ninety-four percent of the oil and gas executives that were surveyed by the Dallas Fed said that administration policies had nothing to do with the increase in the price of oil,” Granholm said.

“I’m telling you that 94 percent of the oil and gas industry — ” she said before Hawley again interjected, telling her that he is “not interested in their opinion” but the facts.

“Your answers are insulting and they are insulting to the people of Missouri who are looking for action,” the senator added. Video Below

Biden’s Energy Secretary just told me, under oath, that Biden’s anti-American energy policies have had NO effect on the price of gas. NONE. What a joke