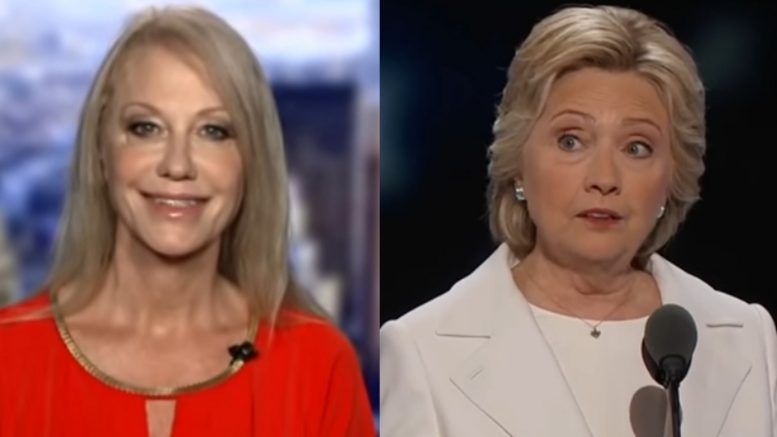 “Hillary Clinton personally approved her campaign’s plans in fall 2016 to share information with a reporter about an uncorroborated alleged server backchannel between Donald Trump and a top Russian bank, her former campaign manager testified Friday in federal court,” CNN reported. “Robby Mook said he attended a meeting with other senior campaign officials where they learned about strange cyberactivity that suggested a relationship between the Trump Organization and Alfa Bank, which is based in Moscow. The group decided to share the information with a reporter, and Mook subsequently ran that decision by Clinton herself.”

Kellyanne Conway reacted to the the latest revelation by claiming that efforts to discredit Donald Trump “was happening during the campaign in 2016 and then it was still happening after President Trump was inaugurated.”

“You had a Hillary Clinton attorney still trying to discredit Donald Trump after he was our 45th President so that Americans would look at him and never think he was a legitimate president,” Conway told Fox News. “They wasted tens and tens of millions dollars in tax payer money. Young people who had been on the campaign and then in the White House had to lawyer up or asked questions. It’s terrifying for them.”

“The 2016 Hillary campaign had no faith in their candidate,” she continued. “They had to cut corners, cheat and lie. Hiding in plain site was a strategy to discredit Donald Trump because of some alpha-bank sending out marketing messages, it looks like by way of this trial, and saying that somehow Donald Trump was a Russian asset. But it wasn’t just what was going on in the campaign — you had members of Congress saying this about Donald Trump during the Mueller investigation. And Robert Mueller himself has come forward with a report — no big there there, no votes were changed in any fundamental way to tip the balance of 2016.”

Related Article: Trump’s Attorney on What She Saw in the Courtroom after Mook Implicated Hillary: ‘I’ve Never Heard so Many Pens Click & Immediately Start Writing’

Mrs. Conway went on to say that she found it “most remarkable” when Robby Mook testified under oath that the Hillary campaign had no faith in the FBI because of Jim Comey, so they instead took the information straight to a New York Times reporter “because they know their auxiliary, the national media, are going to do their bidding and dig in here.”

“It was all a hoax,” Kellyanne declared. “I’m so glad it didn’t ruin people’s faith in democracy as you see record turnout by Republicans in these midterms so far.” Video Below

Sen. Cruz on Durham’s Latest Court Filing: ‘People Need to go to Jail for This, if These Allegations are True’

James Woods Reacts As Rachel Maddow Is Caught Crying Over The Mueller Report: ‘Dear God, This Is So Much Fun’