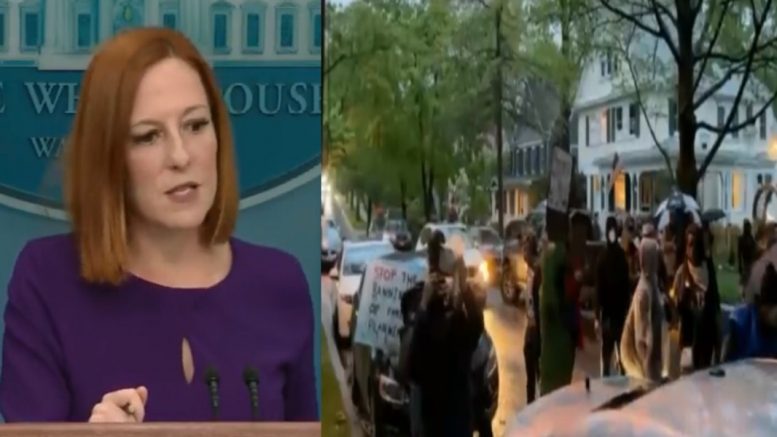 White House press secretary Jen Psaki appeared to encourage activists to protest outside of Supreme Court Judges’ houses during a briefing on Tuesday.

Her remarks comes as pro-choice activists have gathered outside the homes of U.S. justices to protest a leaked draft Supreme Court opinion from Justice Alito that indicates the high court is leaning towards overturning Roe v. Wade.

“I know that there is an outrage right now, I guess, about protests that have been peaceful to date, and we certainly continue to encourage that outside of judges’ homes, and that’s the president’s position,” Psaki said.

Meanwhile, Pro-abortion activists that have been protesting at churches and the homes of Supreme Court justices over the potential overturning of Roe v. Wade are now planning to protest at Democrat House Speaker Nancy Pelosi’s house in San Francisco.

The left-wing group Ruth Sent Us announced Tuesday that protesters from multiple pro-abortion groups are descending on Pelosi’s San Francisco home Tuesday evening to demand that she “investigate the corrupt justices” and “save abortion.”

“We will be marching to the front door of [Pelosi’s] Pac Heights mansion to demand: #SaveAbortionNancy #DefendRoe!,” Ruth Sent Us tweeted.

The group accused Pelosi of “careless and cowardly” leadership in the face of the Republican Party’s “scorched earth strategy.”

We have had careless and cowardly representation by @SpeakerPelosi. The GOP followed a scorched earth strategy with endless Benghazi hearings and ACA repeals, but she passed endless bills that lay on @LeaderMcConnell's desk and refused to hold hearings on TRUMPIAN crimes. 2/x

Through Herculean efforts of grassroots volunteers, @SpeakerPelosi was reinstated in 2019. She held ZERO hearings into Kavanaugh’s crimes and perjury. Imagine if she had. Would this creep be on the Court, daring to overturn Roe? 4/x pic.twitter.com/kmIBva29HZ

(Related: Mayor Lightfoot Issues a ‘Call to Arms’ Against the Supreme Court, Instantly Gets Ratioed)

Fauci On Domestic Air Travel: “Anything That Could Get People More Vaccinated Would Be Welcome”