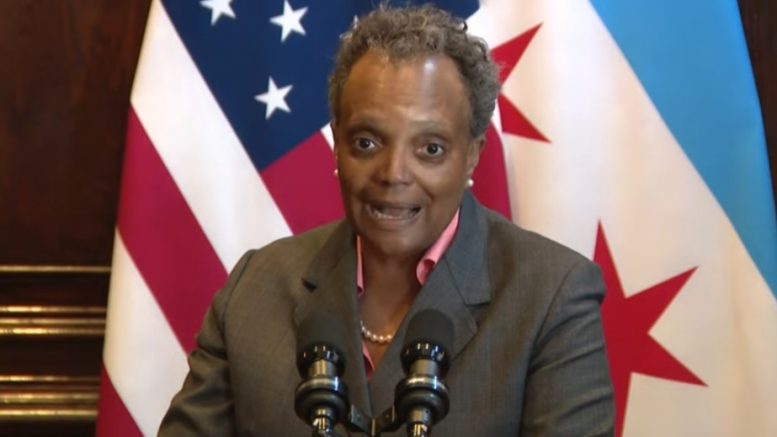 Chicago Mayor Lori Lightfoot faced backlash on social media after issuing a “call to arms” from the LGBTQ+ community against the Supreme Court.

The statement from the Democrat mayor comes as pro-choice activists have gathered outside the homes of U.S. justices to protest a leaked draft Supreme Court opinion from Justice Alito that indicates the high court is leaning towards overturning Roe v. Wade.

“To my friends in the LGBTQ+ community—the Supreme Court is coming for us next. This moment has to be a call to arms,” Lightfoot tweeted on Monday evening. “We will not surrender our rights without a fight—a fight to victory!”

We will not surrender our rights without a fight—a fight to victory!

Following her post, Mayor Lightfoot immediately got “ratioed,” meaning that the replies to her tweet vastly outnumber the likes or retweets. “This means people are objecting to the tweet and considering its content bad,” according to Dictionary.com.

Here are some of the highest-engaged reactions to Lightfoot:

Isn't there already enough shootings and murders in your city, mayor?

Arms? You might want to find a better metaphor.

A call to arms? But — mayor — I thought you’re against guns.

I came out the day after the Pulse nightclub attack, where a radical Islamic terrorist murdered 49 people.

The 2nd Amendment protects all other rights

& is a significant reason why I vote for Republicans.

.@elonmusk: Imagine if a Republican tweeted this.

Didn’t you ban all the arms?

Alright @Twitter time to remove Lori Lightfoot. Those are the rules.

Maybe worry about reducing the call to arms in Chicago first….

Speaking of call to arms, Chicago has some of the worst gun violence in America, and yet as a 5’3 115 lb woman, I was barred from even carrying a taser for self defense on public transit when I lived there.

How about setting your own house in order before criticizing the world.

You hate the Second Amendment and firearms. How you gonna fight?

I cannot believe the mayor of one of the largest cities in the US would tweet this out.

Ummm did a sitting political just call for a armed revolt…?