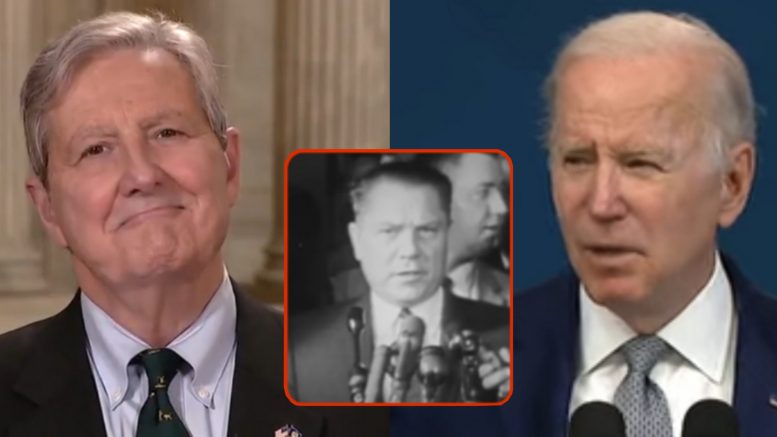 Senator John Kennedy fired back at Joe Biden on Tuesday for implying that he bears no responsibility for record high inflation that Americans have been facing for several months.

“[Biden] said today, for example, that he bears no responsibility whatsoever for inflation,” he added. “I think most Americans are thinking: Right, and Jimmy Hoffa died of natural causes.”

“Hoffa, a prominent Teamsters leader, disappeared in 1975 in what many believe to be a mob-related hit,” Fox News reported. “Urban legend has long pointed to Giants Stadium as his eventual resting place, while a recent Fox Nation investigation probed a former dump not far from the East Rutherford, N.J., sports complex.”

“The truth is that the Biden Administration just keeps kicking it’s own ass,” Kennedy continued. “The truth is Biden won the nomination because he promised not to be Bernie Sanders. Who has he tried to emulate? Bernie Sanders. After 14 months, we know that President Biden believes in bigger government, higher taxes, more spending, more debt, more regulation, a weaker military’s open borders, taxpayer funding, funded abortion on-demand and turning cops into social workers.”

“Here’s his energy policy: Wind, solar and wishful thinking — he thinks he can run… the most powerful economy in all of human history without fossil fuels. And that’s one of the main reasons why the prices at the pump are so high! And the American people see this. They see that after 14 months, nothing is built, nothing is back and nothing is better.” Video Below

Joe Biden: ‘There’s Going to Be a New World Order Out There & We’ve Got to Lead It’