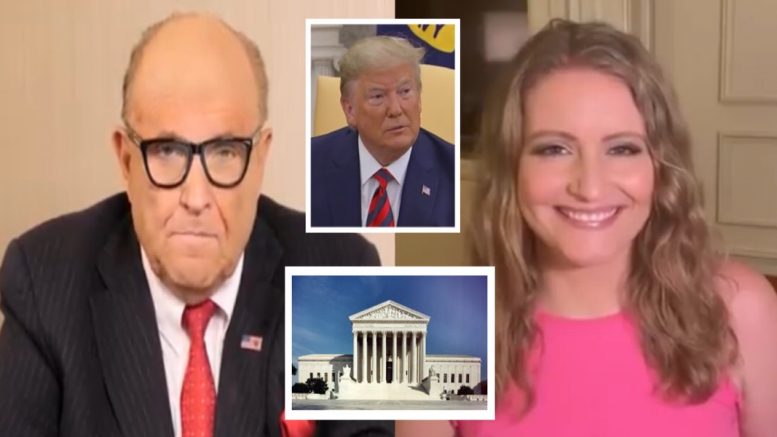 President Donald Trump’s personal attorney and the Trump campaign’s lead attorney, Rudy Giuliani, announced on Tuesday that the campaign filed a petition for a Writ of Certiorari with the U.S. Supreme Court challenging the Wisconsin Supreme Court decision that allowed over 50,000 illegal absentee ballots in violation of Article II of the U.S. Constitution and Wisconsin law.

The filing seeks expedited consideration before the January 6 Congressional review of the Electoral College votes. This marks the second Constitutional challenge to illegal mail voting filed by the Campaign, following a petition from Pennsylvania filed on December 20, according to a press release from the Trump campaign.

According to President Trump’s lead Wisconsin attorney, Jim Troupis: “Regrettably, the Wisconsin Supreme Court, in their 4-3 decision, refused to address the merits of our claim. This ‘Cert Petition’ asks them to address our claims, which, if allowed, would change the outcome of the election in Wisconsin.”

Troupis noted, “Three members of the Wisconsin State Supreme Court, including the Chief Justice, agreed with many of the President’s claims in written dissents from that court’s December 14 order.”

Professor John Eastman, a constitutional scholar at the Claremont Institute, said: “The petition challenging the decision of the Wisconsin Supreme Court to allow partisan state and local election officials to ignore key anti-fraud provisions of Wisconsin law is extremely persuasive. The federal constitutional issues raised by the case cannot be more clear.”

“Article II of the Constitution, as interpreted in Bush v. Gore, assigns to the ‘legislature’ the plenary power to determine the manner of choosing presidential electors, not executive officials, un-elected bureaucrats, or even the state’s judiciary. That authority was eviscerated in Wisconsin, resulting in more than 50,000 illegal ballots being cast and counted,” Eastman added. Continued Below

According to the Trump campaign press release: The Trump Petition raises a number of issues, including: – More than 28,000 votes were counted from people who failed to provide identification by abusing the state’s “indefinitely confined” status, including two Biden electors.

– Nearly 6,000 absentee ballots were counted that were contained in incomplete and altered ballot envelopes that the Wisconsin statutes expressly forbid.

President Trump’s senior legal advisor and attorney, Jenna Ellis, told Grant Stinchfield on Newsmax Tuesday of the Supreme Court, “They’ve shown a dereliction of duty to infidelity to the U.S. Constitution by refusing to take up cases that of course, the president and the campaign absolutely should have standing, as well as the Texas case that was original jurisdiction in the Supreme Court.”

“… [The Supreme Court] needs to look at this on the merits. Bush v. Gore is precedent here for electoral challenges, and they need to recognize that President Trump absolutely gets the same opportunity to argue his case that president George W. Bush did in 2000. And to treat him differently than any other sitting president in every other election, is manifestly unfair, according to due process and our Constitution, Ellis added.

The latest on our @TeamTrump Wisconsin filing in the Supreme Court and why every American who cares about election integrity should be LIVID at @GOP state legislatures that are refusing their Constitutional duty! ⬇️

The Trump Petition raises a number of issues, including: pic.twitter.com/JwjJ5bA1QJ