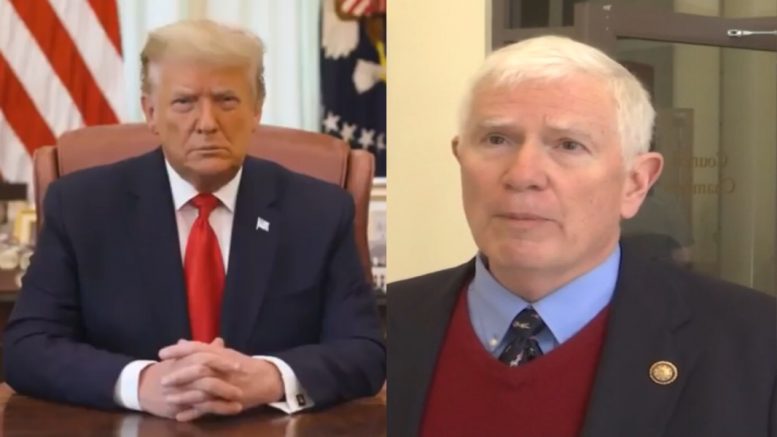 45th President Donald J. Trump announced in an email statement on Wednesday that he is revoking his endorsement of Rep. Mo Brooks (R-AL) for the US Senate, saying the Alabama lawmaker turned “woke” when he encouraged voters to move on from Trump’s claims of election fraud in the 2020 presidential race.

Brooks was the first lawmaker to announce that he would object to the Electoral College vote returns during the congressional confirmation proceedings on January 6, 2021 and previously told Steve Bannon during an interview last summer, “In my judgement, if we only counted votes lawfully cast by eligible Americans citizens, Donald Trump won the election”.

“Mo Brooks of Alabama made a horrible mistake recently when he went ‘woke’ and stated, referring to the 2020 Presidential Election Scam, ‘Put that behind you, put that behind you,’ despite the fact that the Election was rife with fraud and irregularities,” Trump said in a statement from his “Save America” PAC.

During a rally in Alabama last August, Brooks encouraged the crowd to move past the 2020 election results and “look forward”, adding, “There are some people who are despondent about the voter fraud and election theft in 2020. Folks, put that behind you, put that behind you.”

The 45th President went on to say in his statement: “If we forget, the Radical Left Democrats will continue to Cheat and Steal Elections. Just look at what is happening in Wisconsin, Arizona, Pennsylvania, Georgia, and elsewhere, but tremendous progress has been made that will help us in 2022 and 2024. The 2020 Election was rigged, and we can’t let them get away with it.”

Trump also said that Brooks was “unstoppable” when he endorsed him last April, noting that one poll from the fall of 2021 showed Brooks with a “44-point lead” over his nearest competitor. Continued Below

“When I endorsed Mo Brooks, he took a 44-point lead and was unstoppable. He then hired a new campaign staff who ‘brilliantly’ convinced him to ‘stop talking about the 2020 Election.’ He listened to them. Then, according to the polls, Mo’s 44-point lead totally evaporated all based on his ‘2020’ statement made at our massive rally in Cullman, Alabama,” the 45th President explained.

“When I heard his statement, I said, ‘Mo, you just blew the Election, and there’s nothing you can do about it.’ Very sad but, since he decided to go in another direction, so have I, and I am hereby withdrawing my Endorsement of Mo Brooks for the Senate. I don’t think the great people of Alabama will disagree with me,” he said.

“Election Fraud must be captured and stopped, or we won’t have a Country anymore. I will be making a new Endorsement in the near future!” Trump added. Continued Below

Brooks was being challenged in the Republican primary by Mike Durant, a former Army helicopter pilot who was shot down in Somalia in 1993 during the “Black Hawk Down” incident, and Katie Britt, a former business association president and one-time aide to Shelby. Recent polling showed Durant narrowly ahead of Britt, with Brooks a distant third.

The primary is scheduled for May 24, with a runoff set for June 21 if neither of the top two candidates garners at least 50% of the vote.

“Mo Brooks of Alabama made a horrible mistake recently when he went “woke” and stated, referring to the 2020 Presidential Election Scam, “Put that behind you, put that behind you,” despite the fact that the Election was rife with fraud and… pic.twitter.com/UuvVAGWnsa