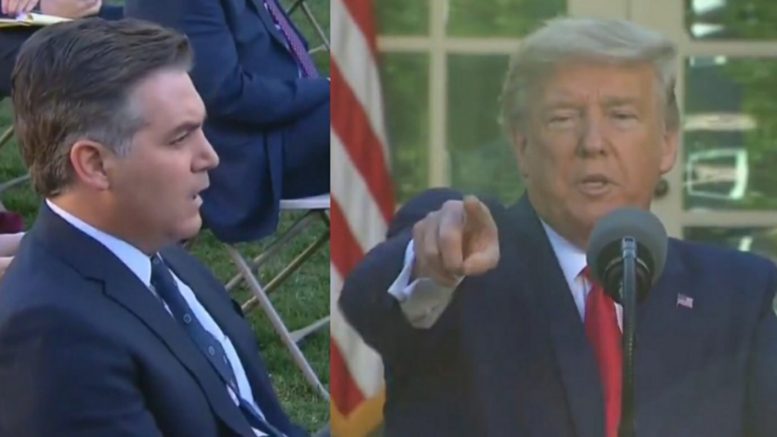 Monday during the White House Coronavirus Task Force briefing, President Donald Trump fired back at Jim Acosta after the CNN White House correspondent pressed him to comment on those who are “upset” with his handling of the crisis.

“Sir, what do you say to Americans who are upset with you over the way you downplayed this crisis over the last couple of months?” Jim Acosta asked before reading off some of the president’s statements.

“‘We have it very much under control in this country, the coronavirus is very much under control in the U.S.A. It’s going to disappear, it’s like a miracle, it will disappear. March 4th, we have a very small number of people in this country infected. March 10th, we’re prepared, we’re doing a great job with it, it will go away. Just stay calm, it will go away,'” Acosta read off.

“What do you say to Americans that you got this wrong?” he asked of the president.

The Commander in Chief responded to Acosta: “It will go away and I do want them to stay calm. And we are doing a great job. If you look at those individual statements, they’re all true. Stay calm. It will go away.”

“You know it is going away,” the president told the CNN reporter. “And it will go away. We’re gonna have a great victory.” Continued Below

“It’s people like you and CNN that say things like that– it’s why people just don’t want to listen to CNN anymore,” President Trump fired back. “You can ask a normal question. The statements I made are– I want to keep the country calm.”

“I don’t want panic in the country. I could cause panic much better than even you. I would make you look like a minor league player. But you know what? I don’t want to do that. I want to have our country be calm and strong and fight and win. It will go away,” he informed Acosta.

“It is incredible the job these people are doing– putting them all together, the job that they’re doing. I am very proud of the job they’re doing, that Mike Pence is doing, that the Task Force has done, that Honeywell, that Procter and Gamble, and Mike [Lindell] and all of these people have done. I’m very proud. It’s almost a miracle and it is the way it’s all come together,” President Trump explained. Video Below

“Instead of asking a nasty, snarky question like that, you should ask a real question. And other than that, I’m gonna go to somebody else,” he added.

The president announced on Monday that the United States has tested over 1 million people for the coronavirus as he unveiled a new rapid test kit for the contagion that is supposed to give results within five minutes.

Trump’s announcement on the new rapid test kit from Abbott Laboratories comes just days after the company said that the U.S. Food and Drug Administration had given them emergency clearance to produce its cartridge-based test. The company says that its test delivers a negative result in 13 minutes when the virus is not detected, Fox News reported.

Acosta tweeted a picture of President Trump in the Rose Garden with a coronavirus test.

In Rose Garden, Trump shows off Coronavirus test which can be performed within about five to 15 minutes. pic.twitter.com/m7GHDd7CRY