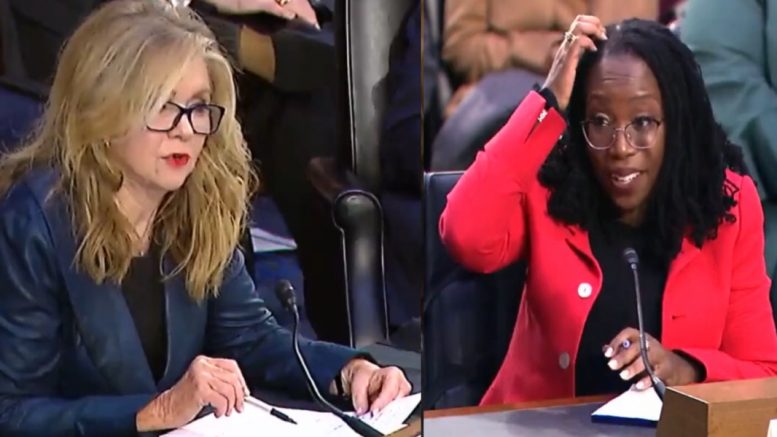 Joe Biden’s Supreme Court nominee Judge Ketanji Brown Jackson on Tuesday claimed that she could not provide a definition of the word “woman” while being questioned by Senator Marsha Blackburn (R-TN) during her confirmation hearing in the Senate Judiciary Committee.

“Can you provide a definition of the word ‘woman’?” the Tennessee Senator asked Judge Jackson.

“Can I provide a definition? No, I can’t,” Judge Jackson responded.

“You can’t?” Senator Blackburn then asked.

“Not in this context,” Jackson claimed.

“I’m not a biologist,” the Supreme Court nominee added. Video Below

According to Women’s History Month:

In 1987 after being petitioned by the National Women’s History Project, Congress passed Pub. L. 100-9 which designated the month of March 1987 as “Women’s History Month.”

Between 1988 and 1994, Congress passed additional resolutions requesting and authorizing the President to proclaim March of each year as Women’s History Month. Continued Below

Since 1995, presidents have issued a series of annual proclamations designating the month of March as “Women’s History Month.”

These proclamations celebrate the contributions women have made to the United States and recognize the specific achievements women have made over the course of American history in a variety of fields.

In another exchange on Tuesday between Senator Blackburn and Judge Jackson, the Tennessee Senator inquired over Jackson’s opinion on “physical differences between men and woman”.

BLACKBURN: "Do you agree with Justice Ginsburg that there are physical differences between men and women?"