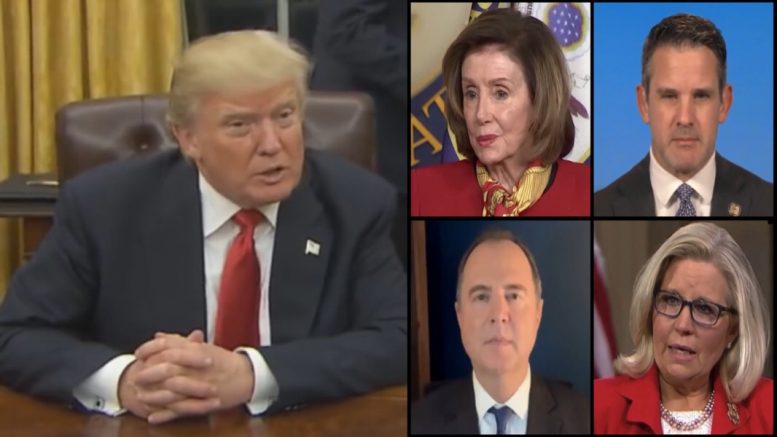 45th President Donald J. Trump, on Friday, issued an email statement saying that January 6 Committee and House Speaker Nancy Pelosi (D-CA) “are completely out of control” as recent reports have surfaced indicating that the Capitol Police are surveilling Members of Congress, Congressional staff, and their Capitol visitors,

His statement comes after several Republicans have signed a letter to Pelosi and to Committee on House Administration Chairwoman Zoe Lofgren (D-CA), calling on them to investigate the reports of Capitol Police “monitoring” lawmakers and citizens. The letter points to an explosive POLITICO report.

“The Unselect Committee and Nancy Pelosi are completely out of control, harassing innocent people, seizing private phone and bank records, and using the Capitol Police to spy on members of Congress,” Trump said Friday in his email statement, issued from his “Save America” PAC.

“The RINOs, who were recently given support by Mitch McConnell, are trying to give legitimacy to a totally illegitimate and Marxist exercise,” he said, referring to remarks made by the senate majority leader, who has recently criticized the Republican National Committee’s (RNC) censure of Reps. Liz Cheney (R-WY) and Adam Kinzinger (R-IL).

“All the real questions about January 6 are being ignored, like why they are hiding 14,000 hours of video footage, and why Nancy Pelosi left the Capitol completely unsecured and denied up to 20,000 National Guard troops as requested by me,” Trump pointed out.

“They should be looking at the massive evidence of Voter Fraud, which continues to come out daily, and is why everyone was there in the first place. The Unselect Committee is a cover up of the real insurrection, which took place on Nov. 3rd!” he insisted. Continued Below

The Pentagon offered National Guard troops two days before the January 6 breach of the U.S. Capitol building, but that proposal was rejected, Kash Patel, former chief of staff to the Acting United States Secretary of Defense under President Trump, confirmed during an episode of EpochTV’s “Kash’s Corner,” last summer.

Patel, who also served as a government official in the United States National Security Council and the United States House of Representatives, said that he believes that the offer from the Trump administration was blocked for “political reasons”, The Epoch Times reported.

“You have to ask yourself, what happened on Jan. 6? I was chief of staff on the Department of Defense on Jan. 6,” said Patel. “We had offered the Capitol Police and Mayor Bowser of Washington D.C. thousands of National Guardsmen and women two days before Jan. 6, and they turned us down. So it could have been prevented”. Video Below

BREAKING: Kash Patel confirms the Trump Admin was trying to deploy the National Guard for Jan 6 but were blocked pic.twitter.com/Db2s0HoBuv

Trump was also asked by Sean Hannity on Fox News last month if he had authorized the request for 20,000 troops in the lead-up to the protests.

“One hundred percent, and attested to by many people. And they turned it down. Nancy Pelosi turned it down, and she is in charge of the Capitol,” Trump responded. Continued Below

“The Unselect Committee and Nancy Pelosi are completely out of control, harassing innocent people, seizing private phone and bank records, and using the Capitol Police to spy on members of Congress. The RINOs, who were recently given support… pic.twitter.com/9a50QaGPHL