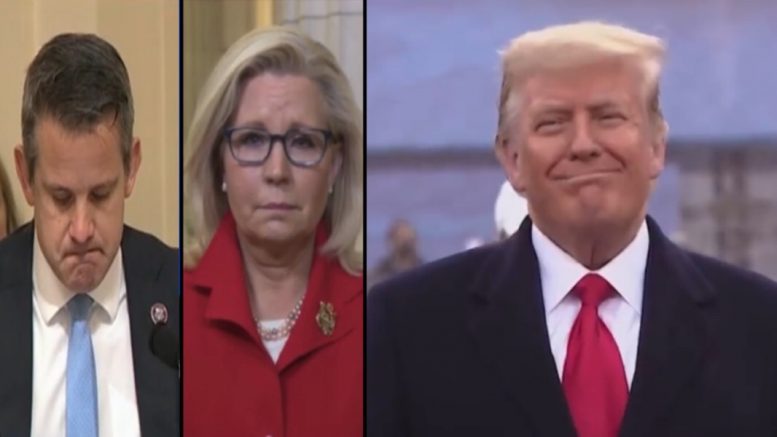 The Republican National Committee (RNC) on Friday formally voted to censure both Reps. Liz Cheney (R-WY) and Adam Kinzinger (R-IL) over their criticism of 45th President Donald Trump and their participation in the Democrat-led House Committee, which is allegedly investigating the January 6, 2021 Capitol protest.

The 45th President responded in an email statement on Saturday evening from his “Save America” PAC congratulating the Republican National Committee and Chairwoman Ronna McDaniel “on their great ruling” to censure, according to Trump, “two horrible RINOs”.

In his email statement on Saturday, 45th President Donald Trump said, “Congratulations to the Republican National Committee (RNC) and its Chairwoman, Ronna McDaniel, on their great ruling in censuring Liz Cheney and Cryin’ Adam Kinzinger, two horrible RINOs who put themselves ahead of our Country.”

“They have almost no approval ratings, and the Republican Party would be far better off without them!” he recommended. Continued Below

The resolution to censure Cheney and Kinzinger was approved on a voice vote with no debate or discussion.

The Washington Post posted a copy of the resolution. It read in part:

The conference must not be sabotaged by Representatives Liz Cheney and Adam Kinzinger who have demonstrated, with actions and words, that they support Democrat efforts to destroy President Trump more than they support winning back a Republican majority in 2022. Continued Below

Representatives Cheney and Kinzinger have engaged in actions in their positions as members of the January 6th select committee not befitting Republican members of Congress, which include the committee’s disregard for minority rights, traditional checks and balances, due process, and adherence to other precedent and rules of the U.S. House and which seem intent on advancing a political agenda to buoy the Democrat Party’s bleak prospects in the upcoming midterm elections.

On the heels of the censure approval, GOP Chairwoman Ronna McDaniel offered this statement to Newsmax:

“Liz Cheney and Adam Kinzinger crossed a line. They chose to join Nancy Pelosi in a Democrat-led persecution of ordinary citizens who engaged in legitimate political discourse that had nothing to do with violence at the Capitol.

almost no approval ratings, and the Republican Party would be far better off without them!"