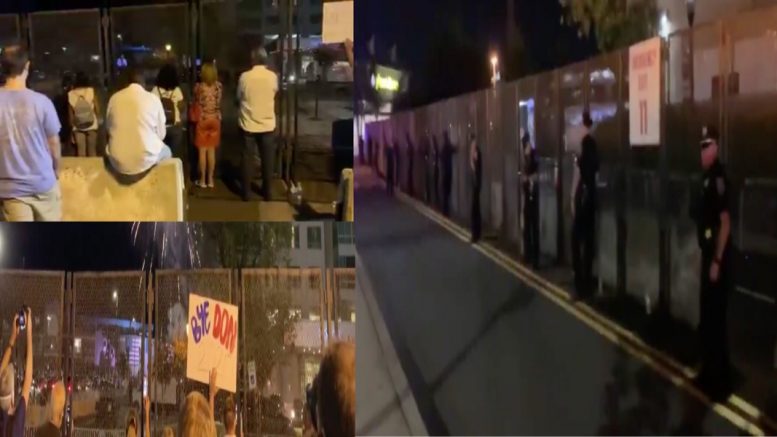 On the final night of the Democratic National Convention, former Vice President Joe Biden took the stage in Wilmington, Delaware Thursday to virtually accept his nomination for the presidency and deliver his acceptance speech.

Supporters and opponents outside the venue were separated by a large wall-like fence. After years of mocking President Trump for building a wall on the nation’s southern border, the Democrats seem to recognize the utility of protection by a wall, Sara A Carter reported.

As reported by Breitbart, the DNC set up the security walls that kept supporters and protesters barricaded into an area outside the Chase Center venue where Biden spoke.

Joe Biden &/or Kamala Harris’s motorcade arrives at the convention in Delaware to DOZENS of supporters pic.twitter.com/dLxgwvnnET

More video footage of the Democrats’ wall-like fence at the DNC:

As the DNC set up the security walls, Biden has vowed to end the construction of a border wall along the United States-Mexico border — the first time in nearly 15 years that construction of barriers to secure the region would be halted by a White House, Breitbart reported.

Meanwhile, police officers were present for the DNC Convention:

It’s almost like maybe the media narrative is a lie and it’s really the left that are the violent ones? pic.twitter.com/reNx53j7aQ

Joe Biden supporters are not practicing social distancing in Delaware

(Related: Don Jr. On Biden’s DNC Speech: “A 50-Year Swamp Creature” Who “Managed To Read A Speech On A teleprompter”)