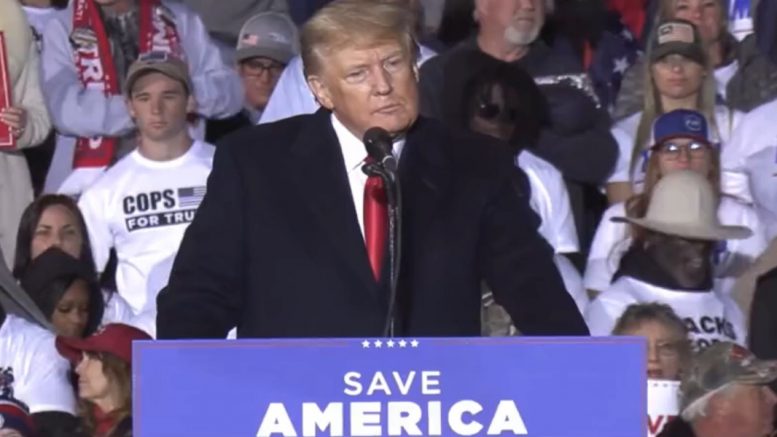 While speaking to supporters during an enormous “Save America” rally in Conroe, Texas over the weekend, 45th President Donald Trump said if he were to run for president and win in 2024, he would pardon January 6 protesters when he was re-elected.

Trump has not officially announced whether he will run for president in 2024.

“Another thing we’ll do, and so many people have been asking me about it, if I run and if I win, we will treat those people from Jan. 6th fairly,” 45th President Donald Trump said to applause.

“We will treat them fairly. And if it requires pardons, we will give them pardons. Because they are being treated so unfairly,” he vowed.

Trump, last summer in a statement, wondered whether House Speaker Nancy Pelosi (D-CA) will “investigate herself” and whether she will address “who didn’t want extra protection” at the Capitol on the day of the protest.

He also blamed Pelosi for the Capitol protest on January 6, saying that she rejected his request for extra security prior to the Stop the Steal rally.

Trump was asked by Sean Hannity on Fox News this month if he authorized the request for 20,000 troops in the lead-up to the protests. “One hundred percent, and attested to by many people. And they turned it down. Nancy Pelosi turned it down, and she is in charge of the Capitol,” he said.