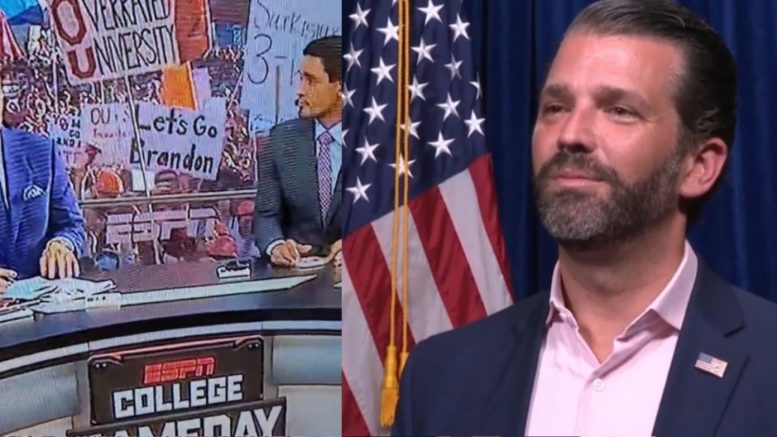 “Saturdays are no longer for the boys… They’re for Let’s Go Brandon chants,” Don Jr. tweeted along with the hashtag #fjb.

Saturdays are no longer for the boys… They’re for Let’s Go Brandon chants. #fjb

“Let’s Go Brandon,” has quickly become a trending code-phrase for “F*ck Joe Biden” just a week after an NBC reporter went into damage-control mode when the anti-Biden chants erupted on live TV at a NASCAR event.

The reporter’s attempt at damage-control has backfired as Americans have made a mockery out of the “Let’s Go Brandon” catch-phrase.

During ESPN’s live broadcast of College GameDay on Saturday, a college football fan was seen holding a “Let’s Go Brandon” sign in the background.

If you know… you know! 👏👏👏#collegegameday @CollegeGameDay #LetsGoBrandon pic.twitter.com/6MkSI8q5QA

A similar sign was spotted on a local channel in Iowa.

Someone even went the full-length of attaching a “Let’s Go Brandon” banner on the back of their airplane, as seen here:

"Let's Go Brandon" banner up in the sky!😂😂😂 pic.twitter.com/JHZNYhtizc