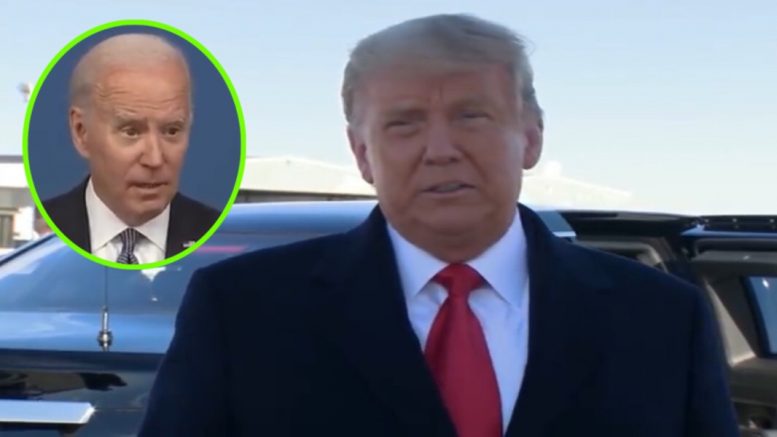 45th President Donald Trump issued a statement Saturday on Truth Social, saying his Mar-a-Lago residence in Palm Beach, Florida is “essentially an armed fort” and called for “the Boxes Hoax Case against” him to “be dropped immediately” in the wake of Joe Biden reportedly mishandling classified documents.

Trump also mocked the selection of “friendly with RINOS” Special Counsel Robert Hur, who Attorney General Merrick Garland appointed January 12 to investigate the mishandling of Obama-era classified documents by then-Vice President Joe Biden — which were discovered at Biden’s so-called “think tank,” the Penn Biden Center, and in his private garage in Willmington, Delaware. Hur is a former special assistant to FBI Director Wray.

What Biden did was wrong, but he was given a reasonable and stable Special Counsel who is sane, inclined not to make waves, friendly with RINOS, and is not known as a flame-throwing lunatic or a Biden hater.

What I did was RIGHT, Secured documents in a secured place, lock on the doors, guards and Secret Service all around, security cameras working. Mar-a-Lago is essentially an armed fort, and was built that way in the 1920’s, with High Walls & structure to serve as the Southern W.H.

I was President of the U.S. and covered and protected by the Presidential Records Act, which is not criminal and allows and encourages you to talk to the NARA, which we were, very nicely, until the FBI, who it is now learned has been after me for years without pause or question, RAIDED Mar-a-Lago, a stupid and probably Illegal thing to do.

As President, I have the right to declassify documents, Biden did not. Special “Prosecutor” Jack Smith, however, is a Trump Hating political Thug. The Boxes Hoax Case against me should be dropped immediately. I have done nothing wrong!

Related: Schumer on Biden’s Classified Documents Versus Trump’s: Let’s see What the Special Counsel has to say