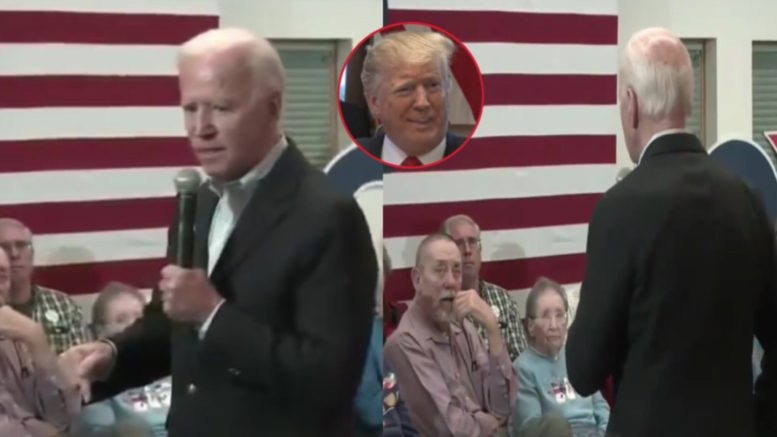 Former Vice President Joe Biden held a few town halls in Iowa over the last few days and made yet another round of embarrassing gaffes.

While speaking to supporters in Algona, Iowa on Monday, the Democratic front runner’s first gaffe or generally, misleading his audience, came when he claimed that he helped negotiate the 400 million in U.S. military assistance to Ukraine that was approved by Congress this year.

“[President Trump] held off 400 million dollars in military aid, which I helped negotiate– when I was a Vice President in Ukraine,” Biden claimed. “Because Ukrainians as I speak, are being killed today by Russians.”

When former Vice President Joe Biden was Barack Obama’s lead person on U.S. policy with Ukraine, however, Biden himself threatened to withhold $1 billion in U.S. aid from Ukraine if the government did not fire Prosecutor General Viktor Shokin within the six hours before he flew back to the White House.

Biden had bragged in a recorded appearance at the Council of Foreign Relations declaring: “I said, you’re not getting the billion. I’m going to be leaving here in I think it was about six hours. I looked at them and said, ‘I’m leaving in six hours. If the prosecutor is not fired, you’re not getting the money.’ Well, son of a b-tch. He got fired. And they put in place someone who was solid at the time.”

What’s more, the Obama-Biden administration did not send lethal aid to Ukraine to defend itself from Russia. (Continued Below)

In 2014, after Russia annexed Crimea and began arming separatists in eastern Ukraine with tanks, armored vehicles and rocket launchers, Ukrainian President Petro Poroshenko came to Washington to plead for weapons to defend his country. In an impassioned address to a joint session of Congress — with Biden sitting directly behind him — Poroshenko said his country appreciated the nonlethal assistance he was getting, but declared “one cannot win a war with blankets,” according to Marc A. Thiessen at The Washington Post.

The Wall Street Journal reported at the time that “President Barack Obama stuck to his refusal to provide weapons or other lethal military gear to Ukraine, despite a passionate appeal for help in fighting pro-Russian rebels by Ukraine’s president.” Why? The administration feared that lethal aid would provoke Moscow.

Instead of RPGs (rocket-propelled grenades), we provided MREs (meals ready to eat) — food rations. As one frustrated former Pentagon official put it at the time, “What kind of message does that send anyway? We are sending MREs while they are being invaded by an aggressor,” Thiessen wrote. (Video Below)

When Trump took office, he delivered a message of strength. In December 2017, the new administration announced that the United States would send the lethal aid to Ukraine that Poroshenko requested and Obama and Biden refused — the sale of $47 million worth of Javelin antitank missiles.

In May 2018, after Ukraine tested its new Javelin missiles, Poroshenko exulted on Twitter, “Finally this day has come!” and personally thanked Trump “for supporting Ukraine and adopting a decision to provide Javelin antitank missile systems,” Thiessen noted.

Democrat presidential candidate Joe Biden claims that he helped negotiate the $400 million in U.S. military assistance to Ukraine that was approved by Congress *this year* pic.twitter.com/urCKEfylWO

Biden’s second gaffe, which turned out to be an epic blunder, came when he told supporters during a campaign stop in Iowa on Saturday, that he “spent a lot of time” with Kim Jong Un, the leader of North Korea. He bragged that authoritarian leaders like Kim Jong Un will never fool him because he knows who they are at their core, which is brutal dictators.

“You’re gonna have to assume that position from the moment they are sworn in on January the 20th and know the rest of the world knows that person– in this case, me– and that I know them,” Biden boasted.

Joe Biden claims has has "spent a lot of time" with Kim Jong Un.

That is FALSE Biden and Kim Jong Un have never met. pic.twitter.com/evCJLqEdAz

‘This Is Not The American Way’: Trump Says Over Georgia DA 2020 Election Probe