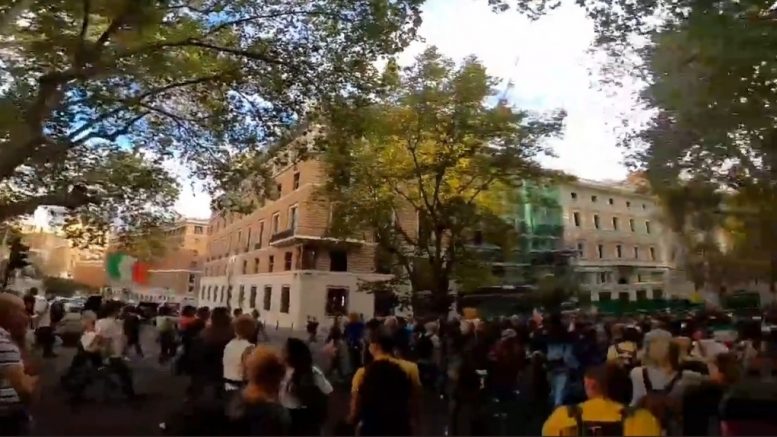 ‘F**k Joe Biden’ chants apparently have now made their way to another part of the globe.

The trending anti-Biden slogan was purportedly caught on camera being chanted by protesters as they marched past the U.S. Embassy in Rome, Italy.

As reported by the Associated Press:

Thousands of marched down Rome’s famous Via Veneto and other streets on Saturday, some smashing their way into a union office and clashing with police as they protested Italy’s new “Green Pass” vaccination requirement for employees to enter their offices.

Here is some more footage of the Rome protests:

🇮🇹 POLICE VANS IN ITALY TRIED RUNNING PEOPLE OVER SO THE PEOPLE ALMOST TIPPED THE VAN OVER ⚡ pic.twitter.com/NLZ9Zt5IjE

🇮🇹 PROTESTS IN ITALY ARE ACCELERATING. THE PEOPLE HAVE HAD ENOUGH! 🔥 pic.twitter.com/uuvqVfntsi

🇮🇹 EXCLUSIVE FOOTAGE OF ONE OF OUR SUBSCRIBERS GETTING HIT IN THE FACE BY A WATER CANNON IN ITALY ⚡💥 pic.twitter.com/2MDpTKXIRn

🇮🇹 ROME IS GETTING WILD 🔥💥 pic.twitter.com/360ehdAvDf