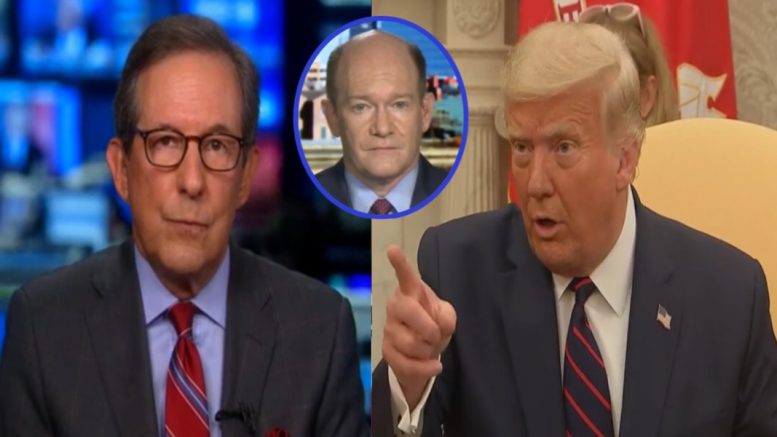 The president took to twitter wondering why Wallace “forgot” to ask Coons “why Biden fought me when I put an extremely early BAN on people coming into our Country from heavily infected China”.

“‘Next we’ll turn to people of the Biden inner circle’, said by Chris Wallace of @FoxNews after unsuccessfully GRILLING Mark Meadows. Then all softball questions to a group of Biden lightweights, including Senator Chris Coons of Delaware,” President Donald Trump tweeted Sunday after Wallace interviewed White House Chief of Staff Mark Meadows.

“Chris Wallace ‘forgot’ to ask a very weak and pathetic Schumer puppet, Senator Chrisie Coons, why Biden fought me when I put an extremely early BAN on people coming into our Country from heavily infected China. Biden later admitted I was right! But why no question?” the president wondered.

Chris Wallace had asked Senator Chris Coons why Joe Biden did not mention China at all during his speech, despite their growing economic threat to the U.S.

“What Joe Biden says on the campaign trail is he believes in us,” Coons said. “He believes that the American people, the American worker, can out-compete China, but he is very clear-eyed about the threat and the challenge that China presents to the United States.” Continued Below

Coons claimed that Biden has “detailed plans for how to strengthen our global network of alliances to effectively stand up to China,” although he did not elaborate on this.

“I’ll remind you, back in January and February as the pandemic was spreading around the world, it was Donald Trump who was saying positive things, cozying up to Xi JinPing, and it was Joe Biden who was sounding the alarm bells about this pandemic. Donald Trump, our president, failed to act responsibly as this pandemic was beginning to impact Americans. Today we have 5 and half million infected Americans, 175K dead Americans because of the bungled federal response. You can’t simply blame China as a way to get our country out of this pandemic and the recession and the chaos that’s resulted from President Trump’s failed response,” Coons alleged.

Chris Wallace didn’t follow up, but instead moved on to remarks Joe Biden made in a recent interview with ABC, in which the former vice president announced he would be willing to shut down the U.S. economy again if it was necessary to fight the coronavirus pandemic. Continued Below

On January 31, 2020, the Commander in Chief issued an Executive Order to “restrict and suspend the entry into the United States, as immigrants or nonimmigrants, of all aliens who were physically present within the People’s Republic of China, excluding the Special Administrative Regions of Hong Kong and Macau”.

Within hours of President Trump’s decision to restrict travel from China, top Democrats and media figures immediately derided the move as unnecessary and xenophobic.

Democratic presidential nominee Joe Biden quickly attacked what he called Trump’s “record of hysteria, xenophobia and fear-mongering” after the travel restrictions were announced, and argued that President Trump “is the worst possible person to lead our country through a global health emergency.” Continued Below

We are in the midst of a crisis with the coronavirus. We need to lead the way with science — not Donald Trump’s record of hysteria, xenophobia, and fear-mongering. He is the worst possible person to lead our country through a global health emergency.

Karl Rove Fmr Bush 43 Deputy Chief Of Staff Details Biden’s Failed Covid History And Everything He Plans To Do Trump Already Did! pic.twitter.com/KNo5QkjW9T

Regarding Senator Coons saying we have “175K dead Americans because of the bungled federal response,” Dr. Deborah Birx and Dr. Anthony Fauci projected in March between 100,000 and 240,000 deaths in the U.S., saying that “we should prepare for it”. 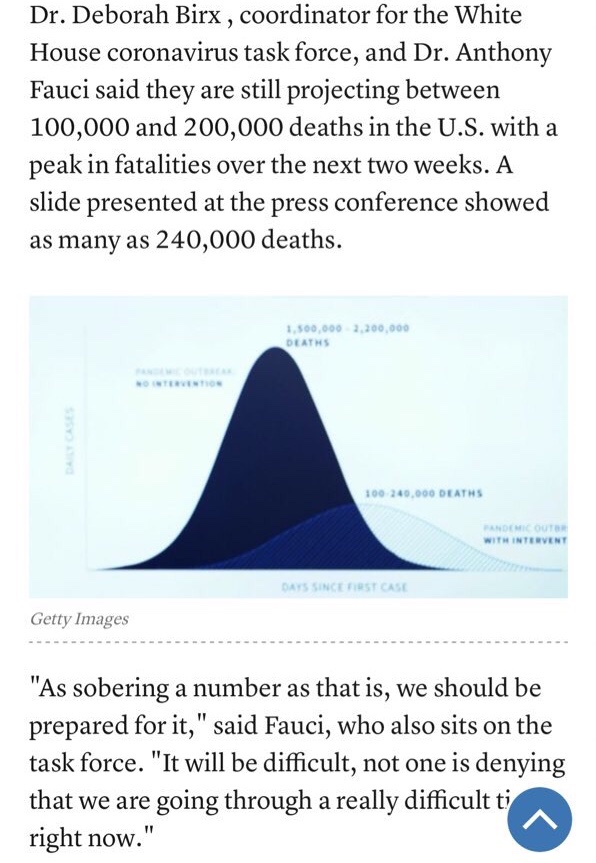 (Related: Bongino On Biden Saying He’ll Shut Down The Economy Again If Advised: “Single-Most Damaging Quote Of This Campaign”)

Rep. Reschenthaler: “I Would Prosecute Schiff For Abuse Of Power…& The Democrats For Obstruction”