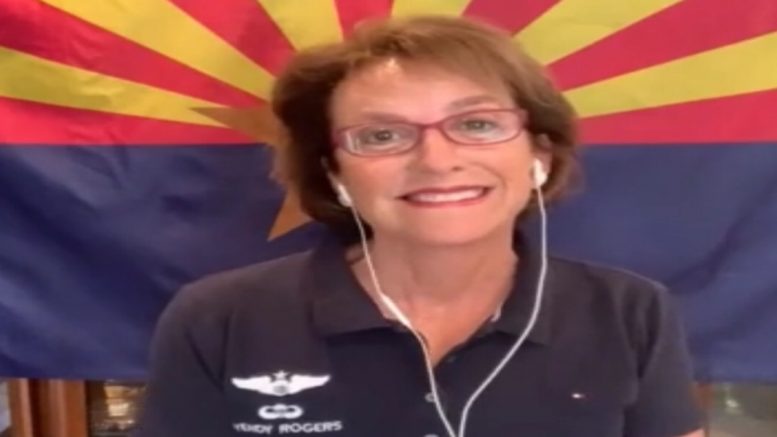 Arizona State Senator Wendy Rogers (R) spoke to host Steve Bannon on “War Room” Thursday, explaining why the electoral certification is “inaccurate” for Arizona and declared, “We should decertify”.

“We are leading the charge here in Arizona to say that decertification should happen. When the hearing was conducted last Thursday, we were first to lean forward to say that ‘all is not right with our ship of state’, in terms of the certification, that we handed in many months ago,” Senator Rogers said.

Arizona State Senator Wendy Rogers noted that “even though Governor [Doug] Ducey signed this certification, we have the plenary power as the State legislature– both the Arizona Senate and the Arizona House– to make that final decision”.

“And so, as such, I was forward leaning in saying that we should eventually here now, decertify, because that certification we handed in months ago is now found to be inaccurate,” the Republican State Senator explained.

Rogers remarks come after the Arizona State Senate held a hearing last week over the forensic audit being conducted for Maricopa County, reportedly revealing malfeasance with mail-in ballots, voter rolls, the voting system being breached, and subpoenaed items still missing/not handed over to name a few.

Asked if she has seen enough in Maricopa County to prepare to move to decertify electors, Senator Rogers replied, “That’s affirmative. And again, to decertify is to say what we handed you federal government, was not accurate. It’s not to say we have full and final proof necessarily, but we have doubt now and we have confirmation that the data points that we did turn in, were not accurate.” Continued Below

“I’ll just tick off some of the most troublesome data points… We had the 37,000 security queries in March of deleted logs. We had the almost 4,000 voters who were registered after the 15th of October, who still got to vote,” she said.

“We had the most egregious and troublesome data point of the 74,000 plus ballots that were mailed in, but presumably never sent out to begin with,” Senator Rogers explained, which was revealed during last week’s hearing.

“How does Maricopa explain that?” the Republican lawmaker wondered. “And that’s the whole sort of narrative. It’s up to them to explain this.” Video Below

(Related: AZ State Sen. Wendy Rogers: ‘We Have to Eject Fraud Machines’ – ‘We Need to Run’ Bret Baier ‘Out of the Republic’)